As only a handful of the opposition arrived in time to start the game (as is their tradition), the Spin Doctors were only too happy to honour Groot Drak’s tradition of sending the opposition in to bat without a coin toss.

The opening bowlers, Corrie Brand and Colin Myburgh were both unlucky to not pick up wickets with their first overs, but both toiled hard and were incredibly economical, with Corrie going for 20 for 1 from his 7 overs and Colin going for just 10 runs in his 5 over spell.

Kudu Kotze (29/3 from 5) and young Liam Carruthers (24/0 from 4) were the change-up bowlers and both bowled very well against in-form Tengo and Sheels from Spin Doctors. At drinks, the opposition were 66/2 with their 3 and 4 batters just getting started. A slow start, but plenty of batters in the hutch.

Sheels and Tengo both opened up after the break and smashed the ball to all parts, with Bruce Taylor (47/1 from 5) and MC Uys (43/1 from 7) taking the bulk of the punishment, despite some good bowling and 2 missed chances. Eventually the batters succumbed to the spin, with Bruce dismissing Tengo for 53 and MC getting the prized wicket of Andrew Sheels for 80 runs, with Liam Carruthers taking hist first catch for Groot Drak. Craig McNaught pitched in with a run donation of 19 from 2.

By this stage, the damage was largely done and Spin Doctors posted a very competitive target of 200 for victory.

After a quick break, Groot Drak were focused and ready for what promised to be a hard run-chase.

MC Uys got the second innings off to a blistering start, scoring 10 from the first two balls. Unlucky to play on, MC was dismissed for 26 from just 9 deliveries. Gary Seaman at the other end batted with discipline and refused to give his wicket away.

Corrie Brand was promoted up the order, coming in at 3, but struggled to 12 from 19. Colin Myburgh, Hannes Langeveldt and Dave Johnson could only manage 1 run between them, as Groot Drak found themselves in a spot of bother at 87 for 4.

Kudu Kotze was sent in at 6 to steady the ship and to support Gary in the middle overs, which he did with aplomb! Some lusty blows and fantastic timing saw Kudu retire on 53 from just 46 balls – exactly what the Doctors did not order. With victory in his sights, Gary was bowled out for an exceptionally well-played 71 from 80 balls.

Jono Boulton (9 not out) and Craig McNaught (2 not out) saw off the last few runs to seal the win for Groot Drak, with 4 overs to spare.

A well-deserved beer was enjoyed on the pitch with the Doctors after the game, before finding the comfort of the shade for some fines.

It was brilliant to host Spin Doctors again, who always bring a wonderfully-balanced side, play a great game of cricket and offer lovely company off the pitch as well.

Man of the match was a toss-up, with Gary scoring loads of very valuable runs, but eventually, it was decided that Kudu, with his quick 50 and 3 wickets would take the honours. 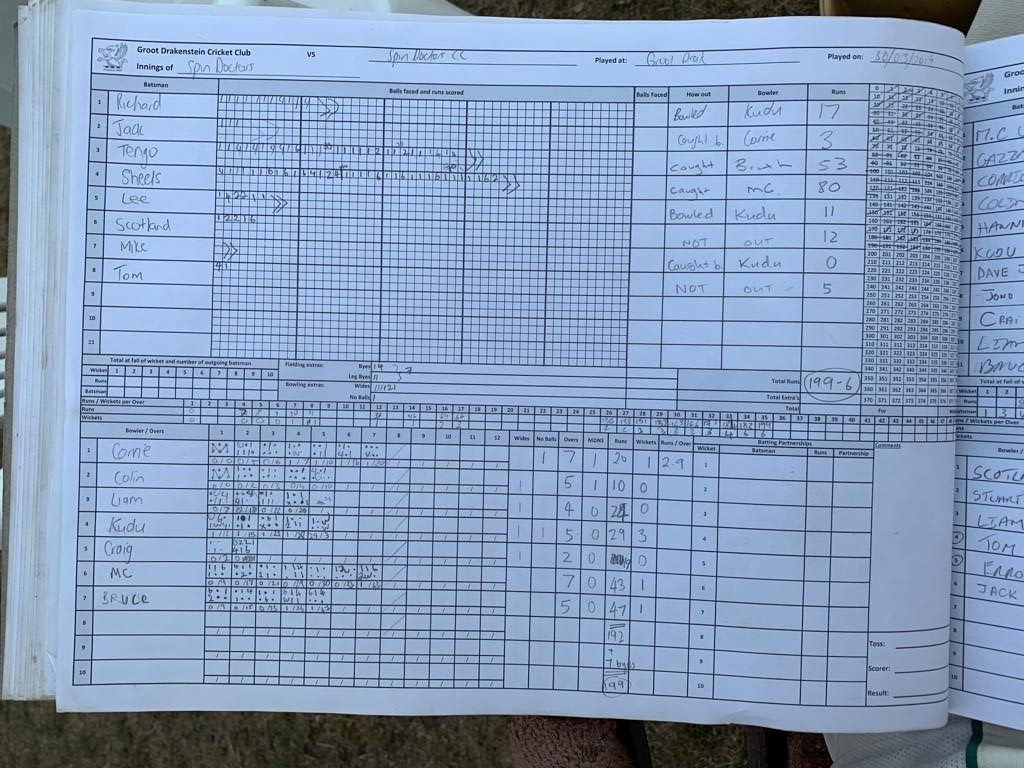 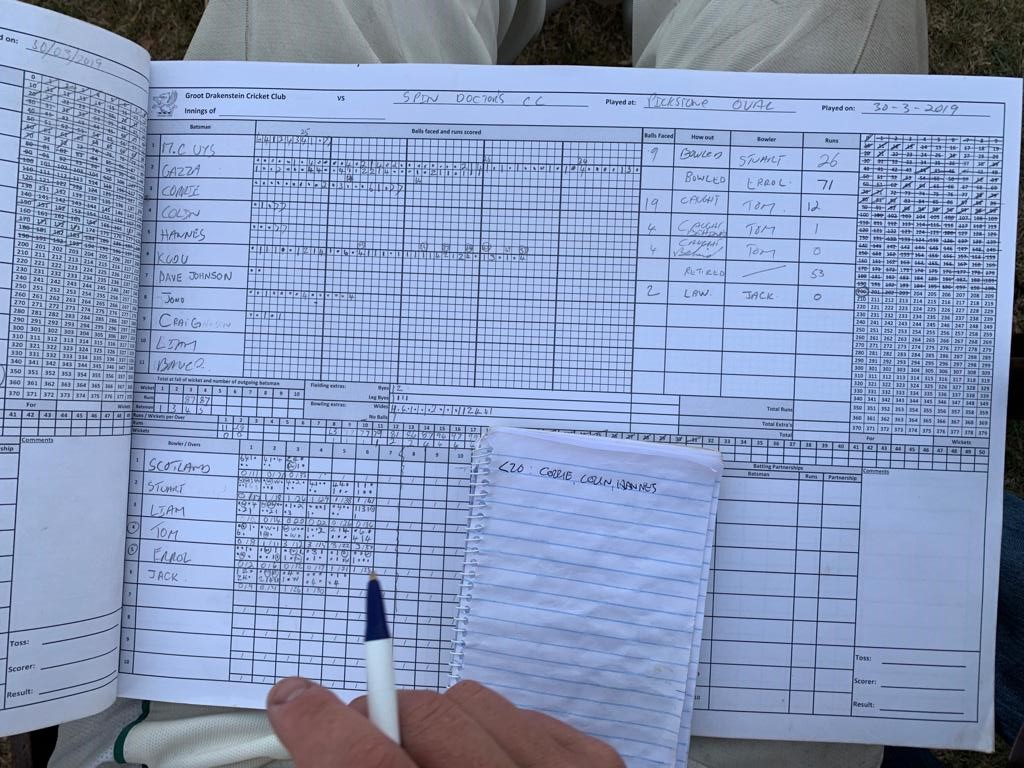