The weather on Sunday the 29th of September 2019 did not look good. Big clouds, heavy rain and gusting winds. Not what we expect from the Boland in the middle of Spring! Having garnered a huge amount of support (26 members making themselves available) – the Groot Drak lads were not going to allow the season’s first game to be cancelled lightly. As to not damage the turf wickets, our old Flicx wicket was dusted off and rolled out next to the square and, within an hour, we were ready to play.

The captains tossed and Chairman’s team were sent in to bat in less-than-ideal circumstances.

Wickets fell regularly from the start, with only Adrian Raisbeck (18 off 11) managing any significant runs as the Chairman’s team limped to 59 all out. Corrie Brand (3 wickets), Morne Maritz (2 wickets), Jannie le Roux (2 wickets) and Marco Bosman (3 wickets) performed outstandingly with the ball for the President’s team.

The President’s XII started very slowly, but saw off some dangerous bowling and knocked off the score with plenty of overs to spare. 5 wickets fell in the second innings, with most of the damage being done by Matthew Tracey, who bagged 3 wickets in his 5 overs. Mention needs to be made of the batting performances of Gert Uys (17 off 18), Christo la Grange (8 off 32), debutant Thiery Milot (8 off 23) and Claude Chantler (10* off 11) who saw the President’s XII over the line.

With plenty of hours of light left, both captains decided that a rematch was in order and the Chairman’s team was sent in to bat once again – this time with the batting order reversed.

A much better performance with the bat saw Shayne Ayford (13 off 20), Adrian Raisbeck (24 off 39) and Jono Boulton (12 off 42) get the Chairman’s XII to 91 before being bowled out again. This time, it was Conrad Harley (3 wickets), Craig McNaught (2 wickets) and Morne Maritz (2 wickets) who did the damage with the ball.

With the President’s XII also reversing their batting order for the chase, things were bound to be interesting as the light started to fade.

An impressive bowling spell from young Chad Ayford saw him nab the first 4 wickets for only a handful of runs! One has to question why he didn’t bowl in the first game. Things were looking bleak for the President’s team as their top 6 only managed 17 runs together, including ducks from Devin Whelan, Marco Bosman and debutant, Jannie le Roux. The innings was stabilized by Craig McNaught (29 off 49) and Conrad Harley (12* off 24) as their ‘timeless-test-style’ batting allowed a second victory for the President’s XII.

As the weather was still not ideal, fines were held in the clubhouse, with an inside braai warming the cold bones of all the players. Plenty of poor performances were punished, while a select few players were rewarded for their contributions for the day. The Groot Drak players showed that it takes more than bad weather to dampen the spirits and a wonderful day was enjoyed by all. A warm welcome to all the new players; Thiery Milot, Jacques Viljoen, Justin Sage and Jannie le Roux. 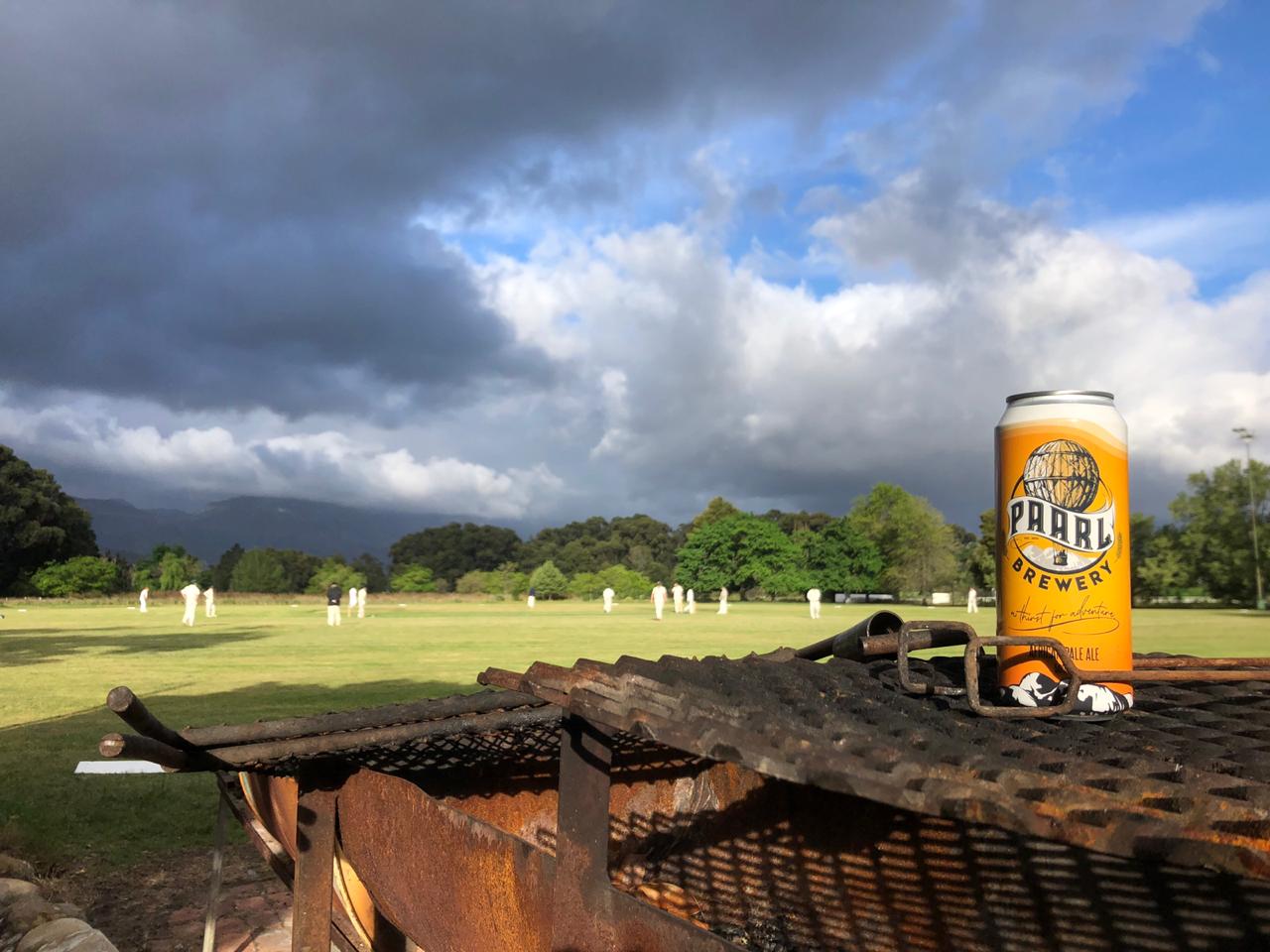 Cloudy with a chance of beer 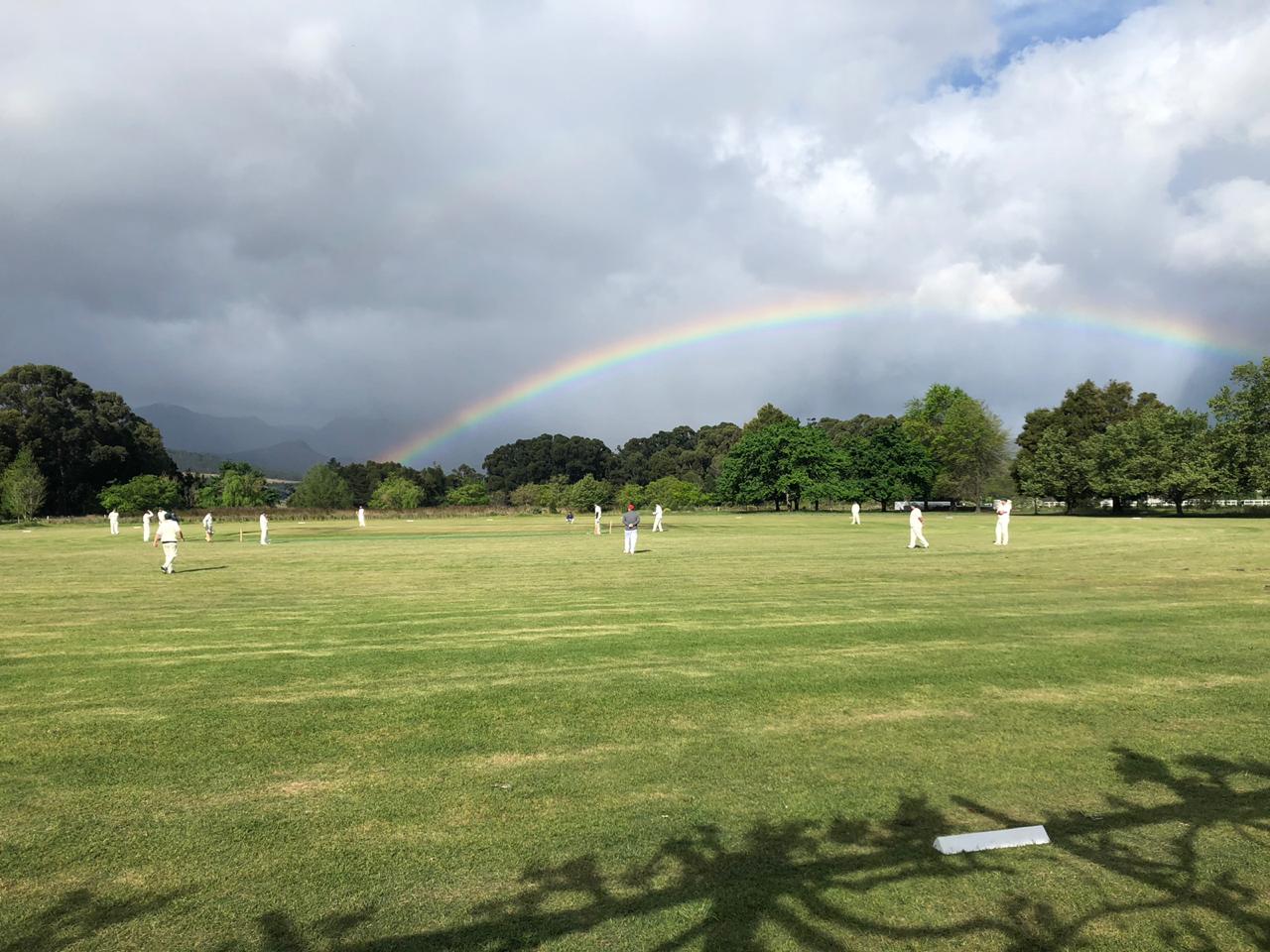 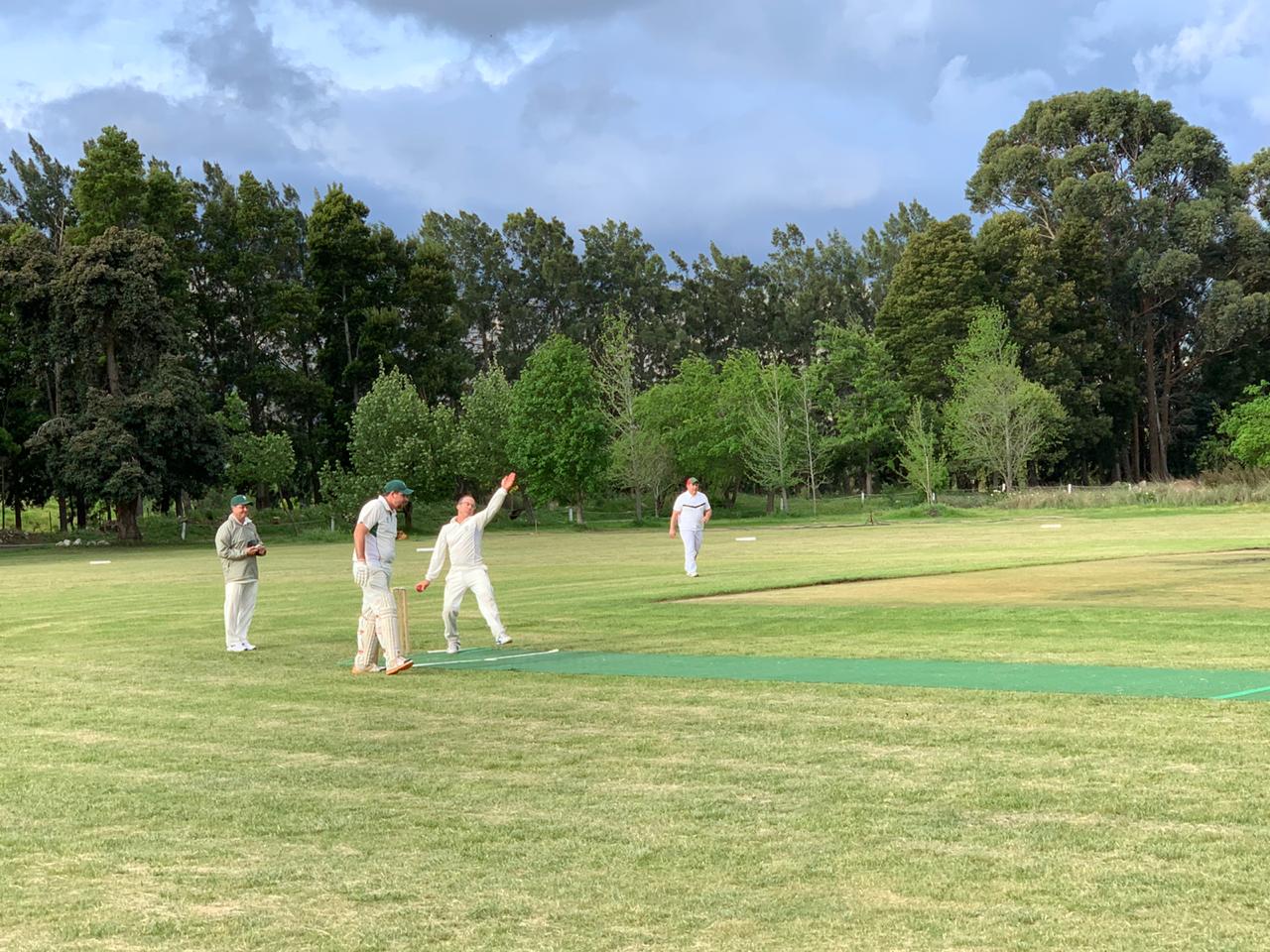 Chairman and Wicket Keeper, Jono Boulton with some rare in-swing! 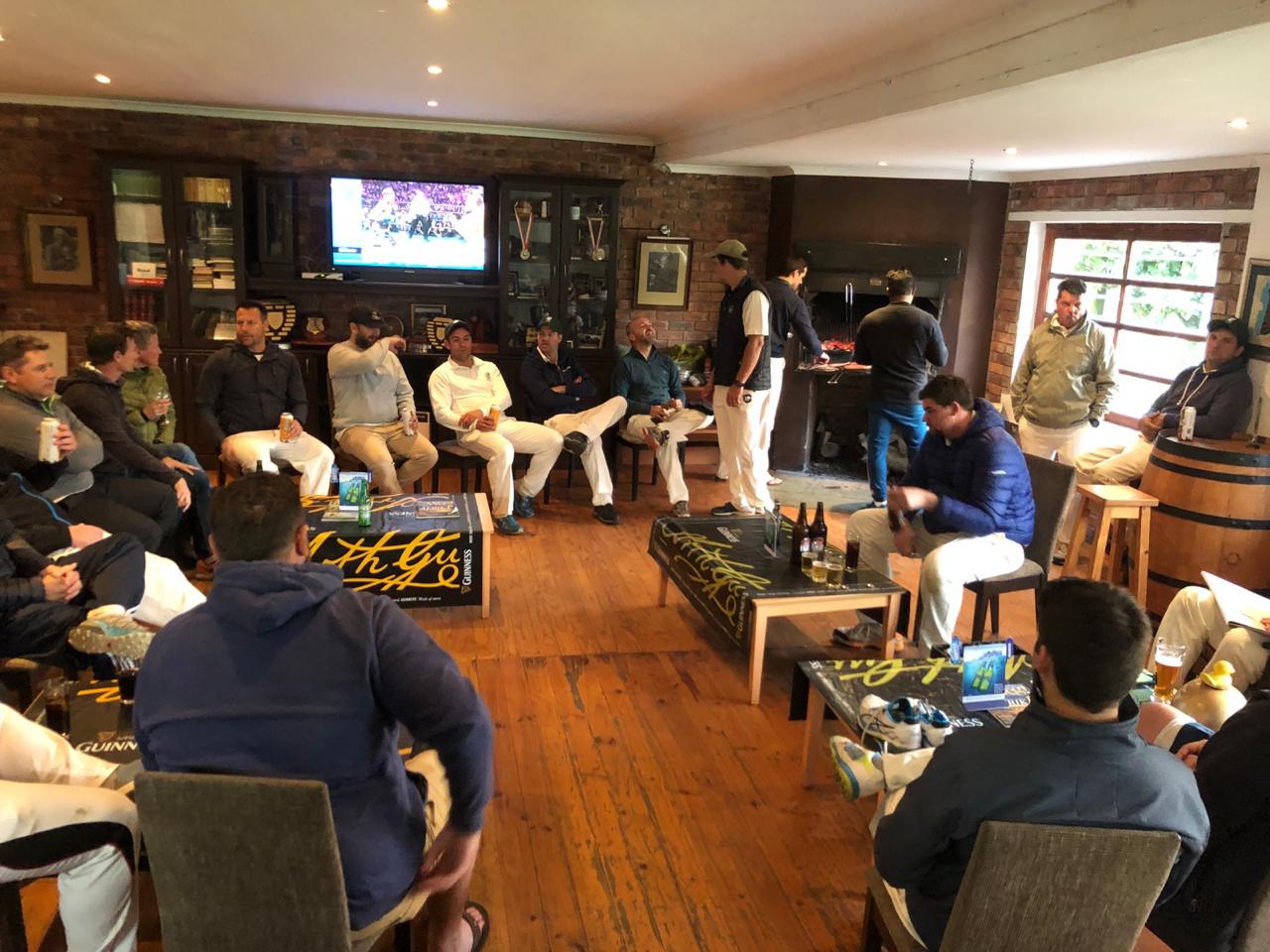 Fines meeting about to get underway 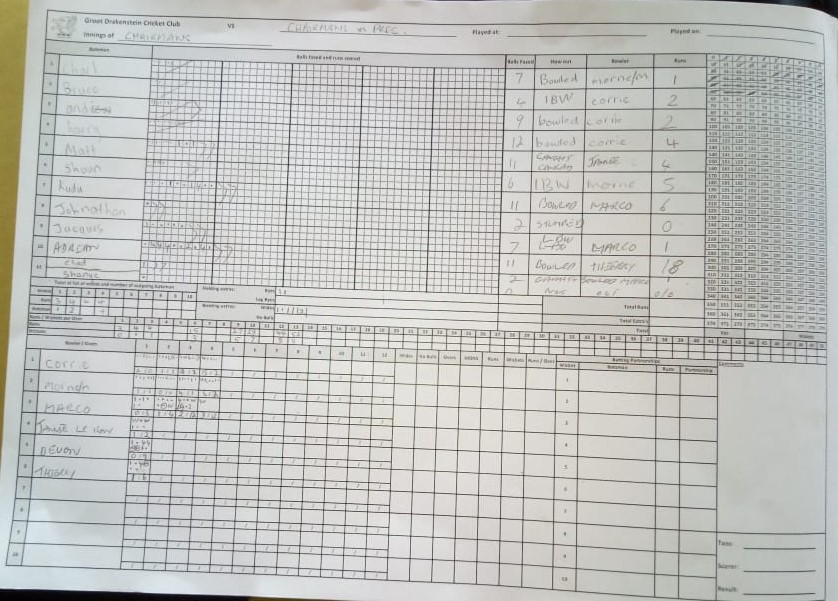 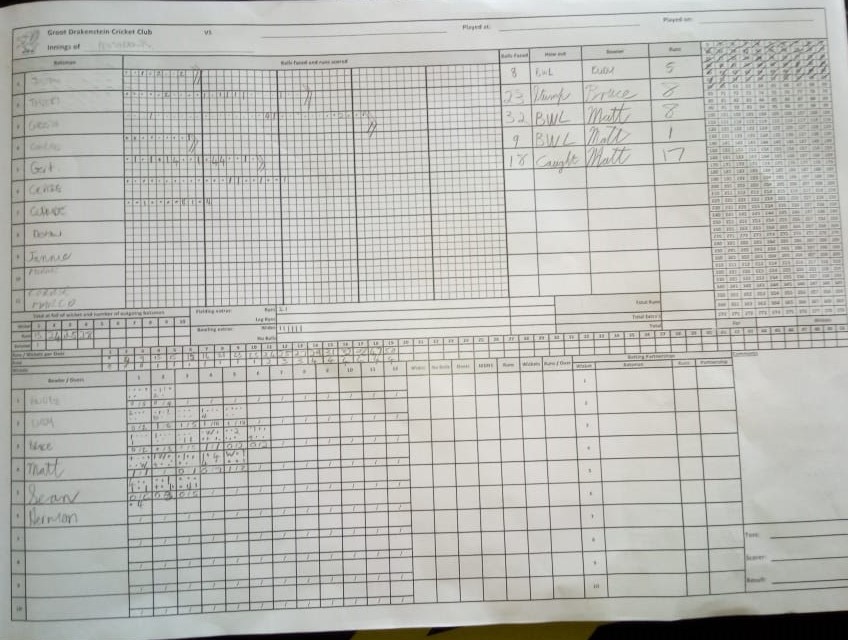 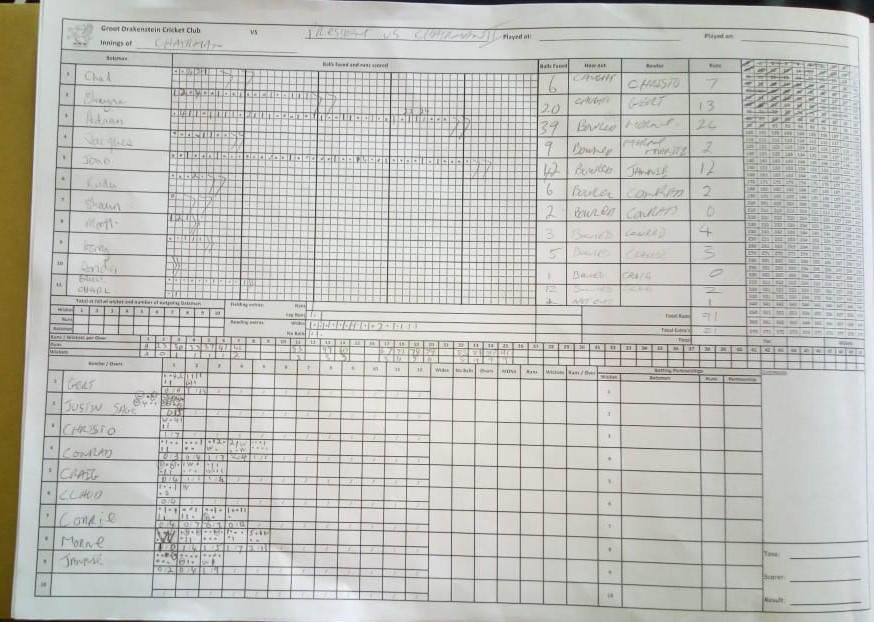 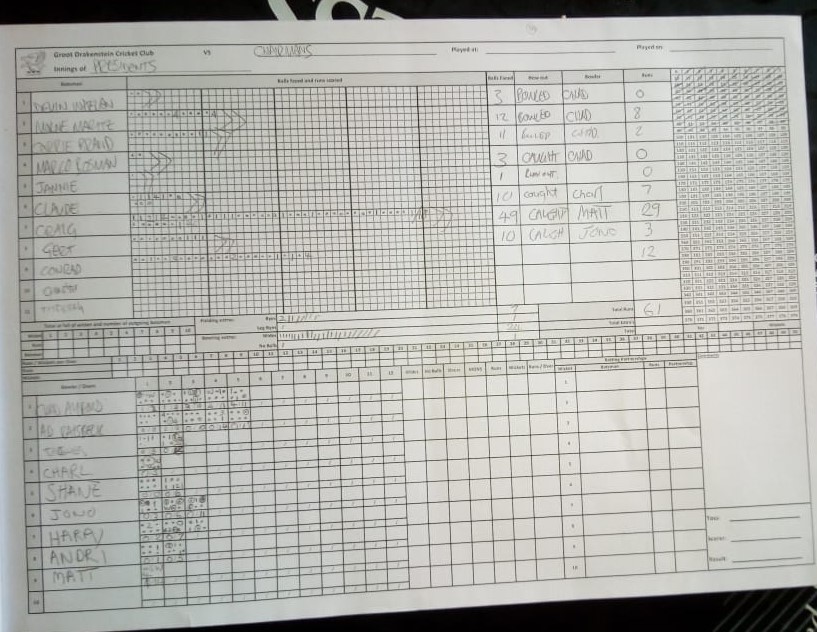