On Saturday the 23rd of November, The Willburys travelled from far and wide to play against a Groot Drak side who were keen to level the scores after the drubbing they received 2 years ago.

The Willburys were sent in to bat after their skipper, James Carmichael introduced a new rule in to the fray: the first 22 overs of each innings had to see 11 different bowlers. To their own surprise, Gary Seaman and MC Uys were handed the new ball for the first 4 overs of the game.
Gary bowled well for his 0/9, while MC was in business with just his third delivery, trapping Matt McCormack in front for a duck and then catching Ed Lepine the very next ball, setting up a hat-trick chance that was not to be.

Herman Fourie (1/19 from 6) was the pick of the bowlers and bowled a brilliant line and length in the middle overs, supported well by Moustache Maritz (0/19 from 2).

While a touch expensive, Colin Myburgh took 2 wickets, while Louwtjie Uys (0/17 from 2) helped out with his medium pace.

Claude Chantler decided to do away with his regular off-spin and bowled some seam-up for a change, which proved mighty effective, as he took 1/9 from 2.2 overs – his wicket being top-scorer, James Carmichael. Liam Carruthers (1/5 from 2) from the other end was far too accurate and had to be taken off after 2 overs, but had dangerous-looking Rob Pearce caught at gully with a brilliant reflex catch from Claude Chantler.

Craig McNaught had no choice but to bowl a few overs and surprised everyone, taking a wicket and going for just 14 from his first 4 overs and then returning to his usual self, by donating 12 runs off his last over.

The Willburys were bowled out in the last over of the innings for a very competitive 204 runs.

After a quick bite and a salute to the Groot Drak flag, the boys were ready for what promised to be a tough run chase.

MC Uys and Claude Chantler opened the batting and both batted with flair to put the home side well in the driving seat, with MC making 32 from 36 and Claude being run out just one run shy of his 50 from only 32 balls.

Loutjie Uys fought hard for his 3 runs, while Liam Carruthers was promoted to number 4 and had a real chance to score some proper runs for the club. From ball one, Liam looked settled and played some glorious shots all over the park, while Morne Maritz wasted no time and smashed a quick 30 from 22 before being given out LBW.

Jono Boulton was not out for 12 from 13, while Liam earned an incredibly well-deserved 51* from 48, his first half-century for the club, which earned him Man-of-the-Match, as Groot Drak romped to victory with 10 overs to spare.

A quick beer to honour the pitch and both teams settled in for some side-splitting fines, largely dominated by Mike ‘Fun’ Tonder.

After fines, all the players and some of their partners sat down to an awesome dinner prepared expertly by Lejean Pieterse and Sarah Boulton – cooked by braai-master Colin Myburgh.

A wonderful day of cricket and camaraderie came to an end after a few bottles of wine and plenty of laughs. We look forward to hosting the Willburys any and every time they find themselves in our part of the world. 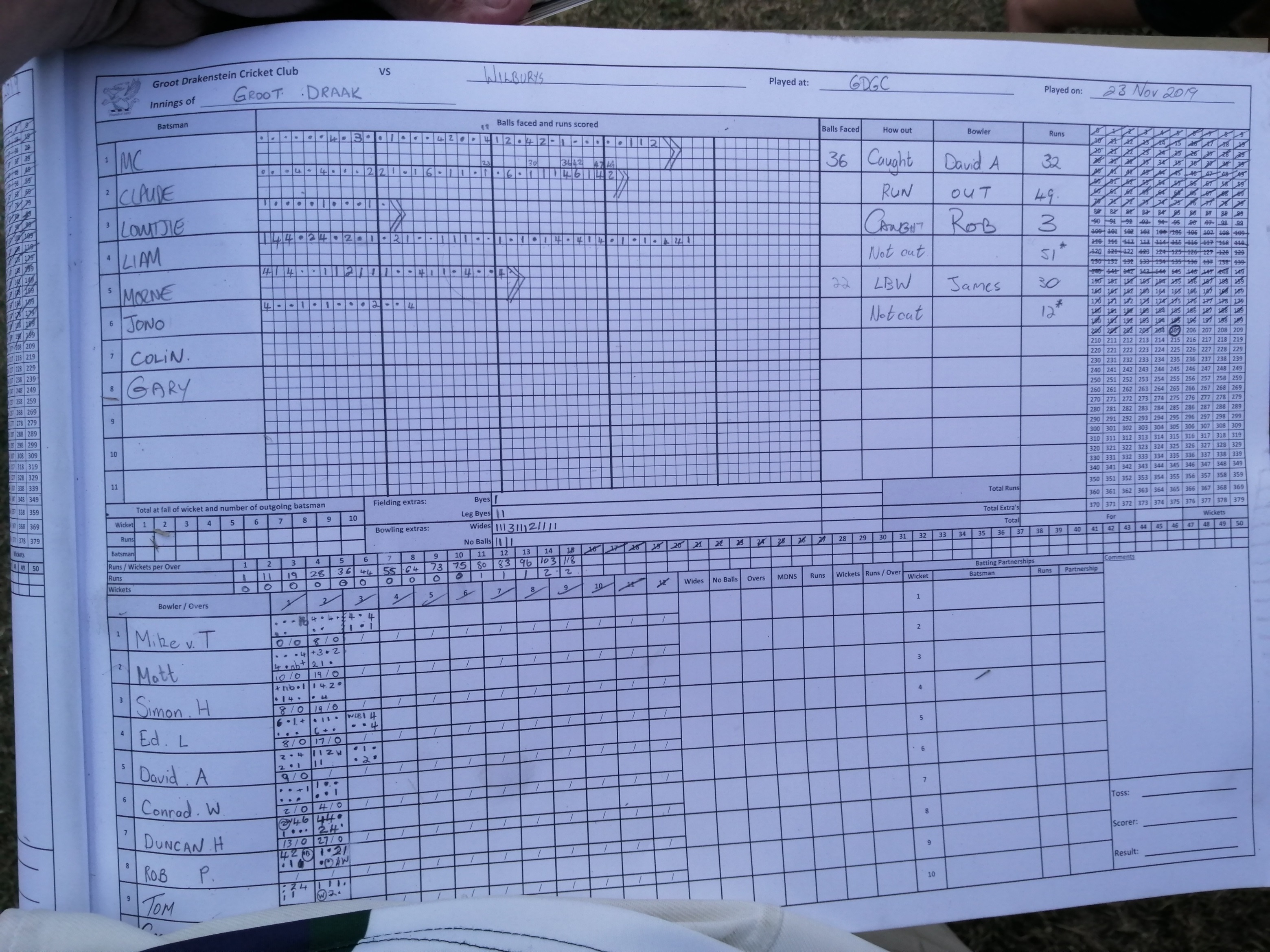 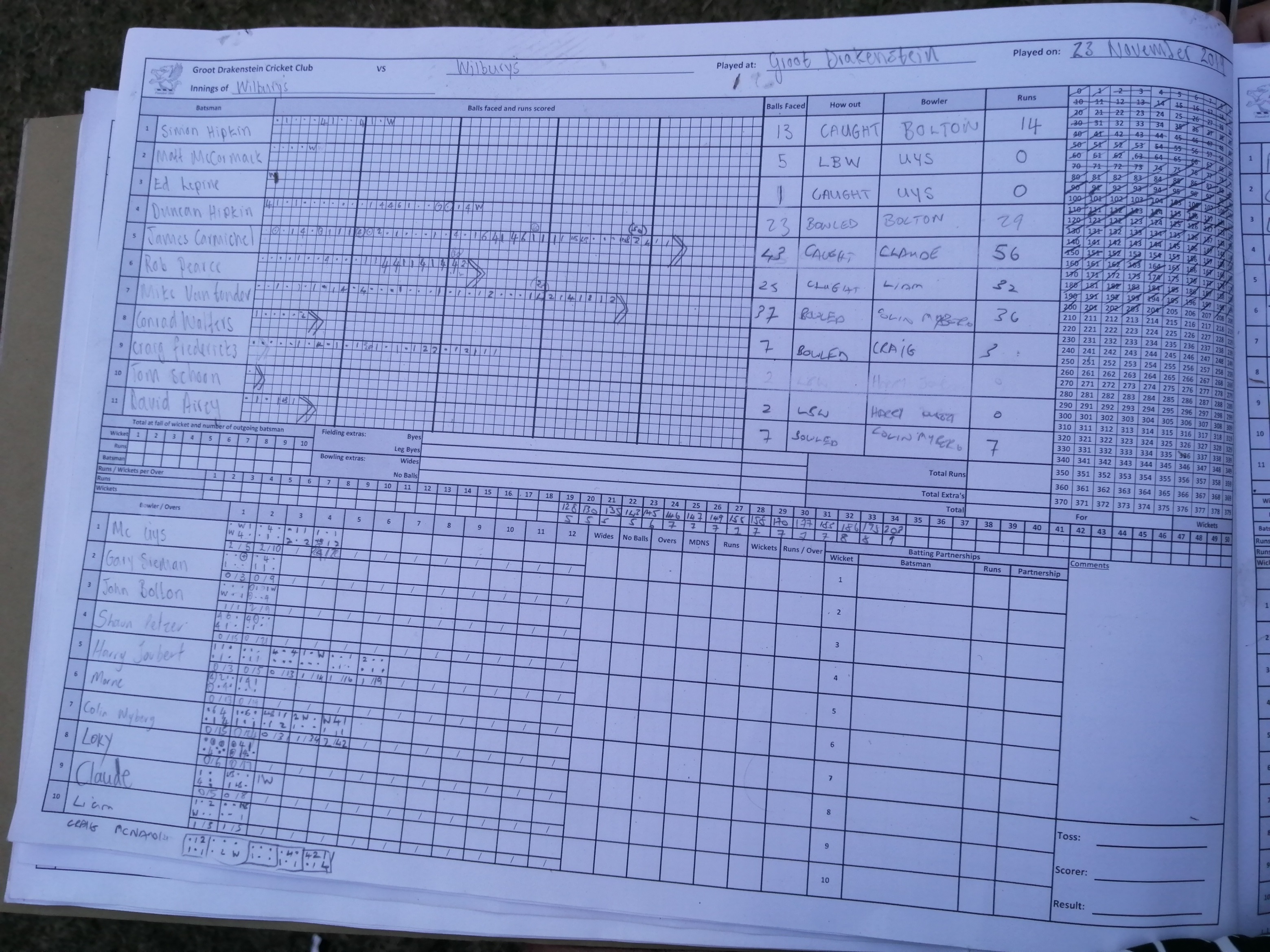 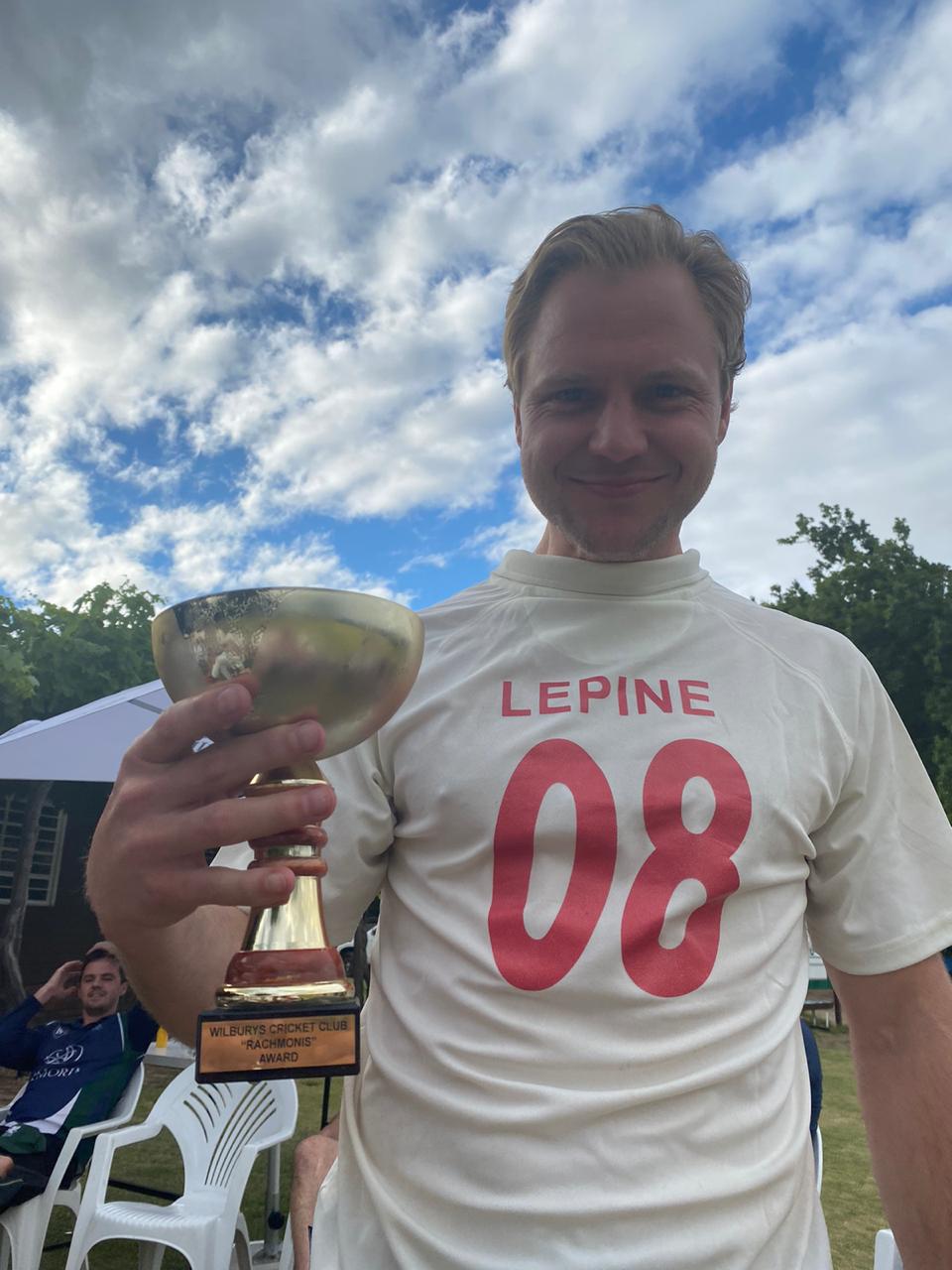 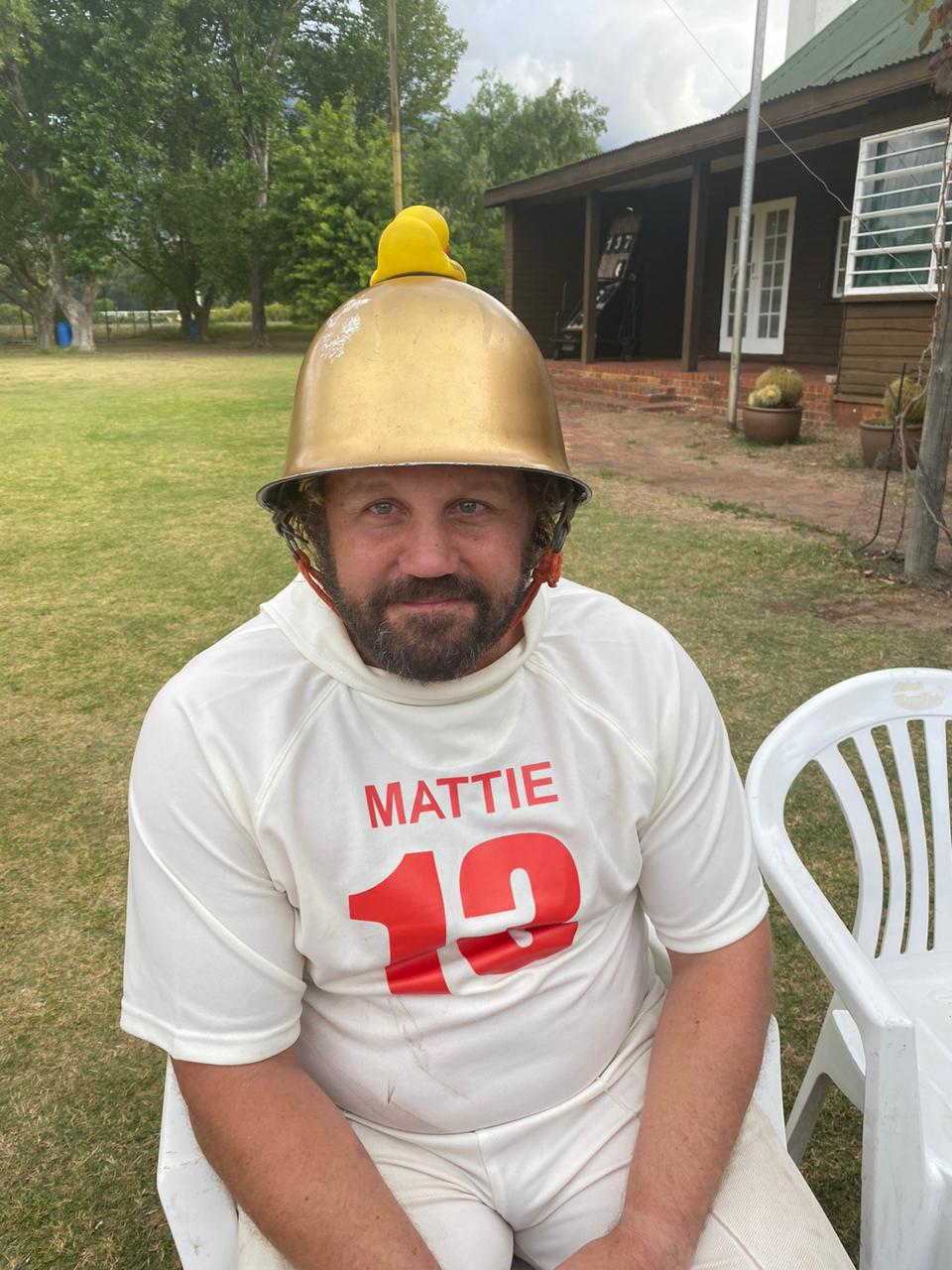 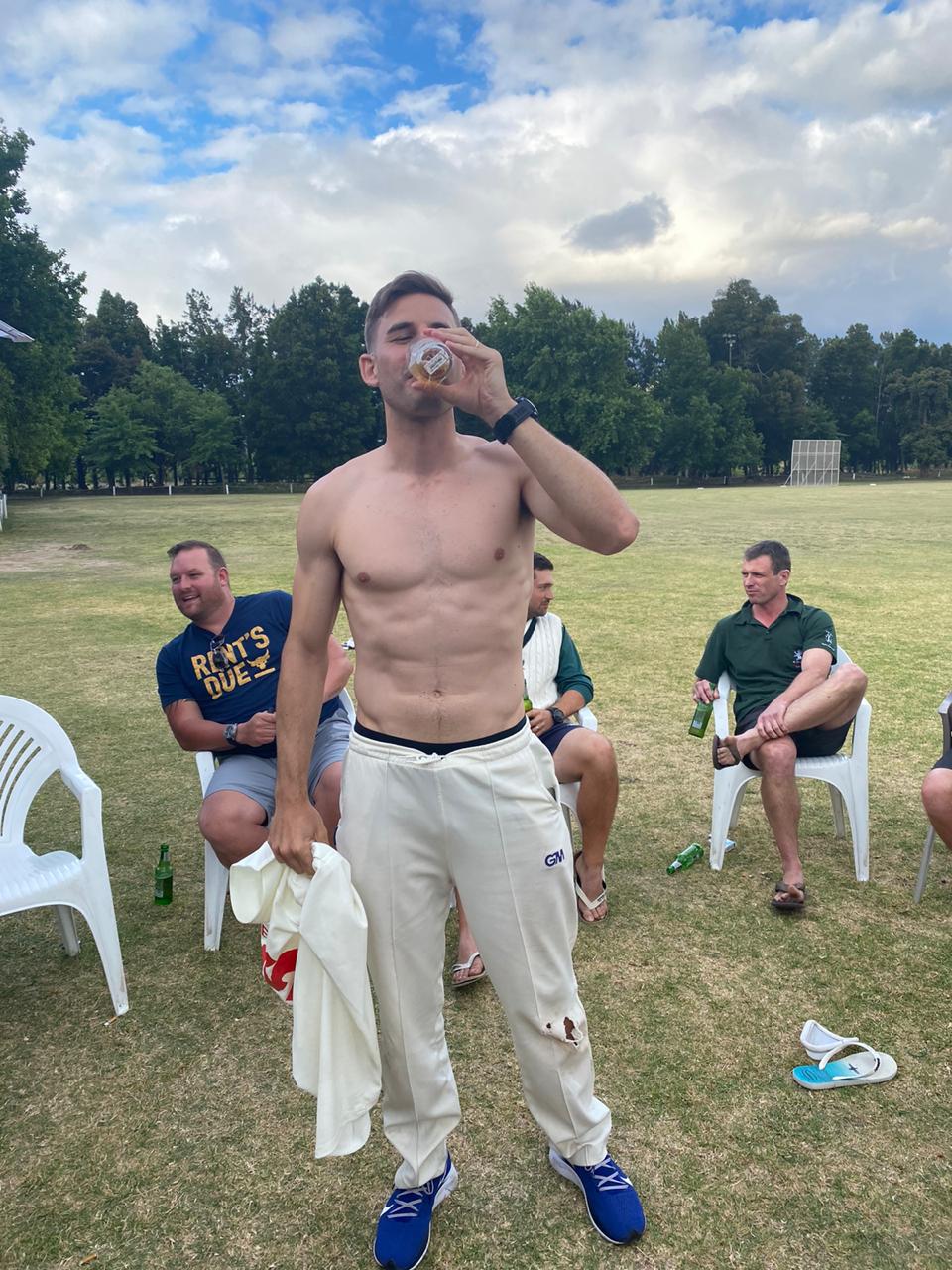 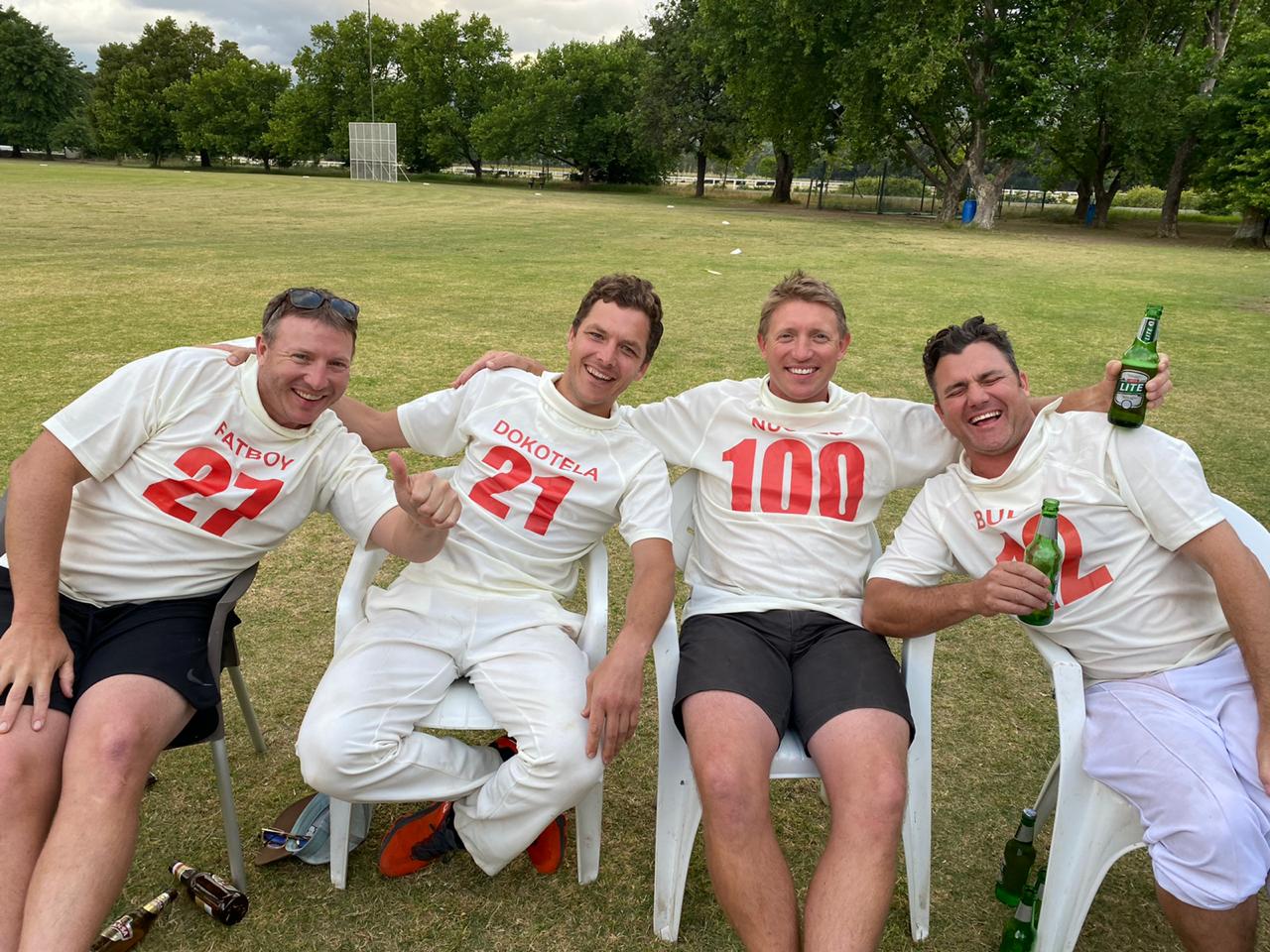 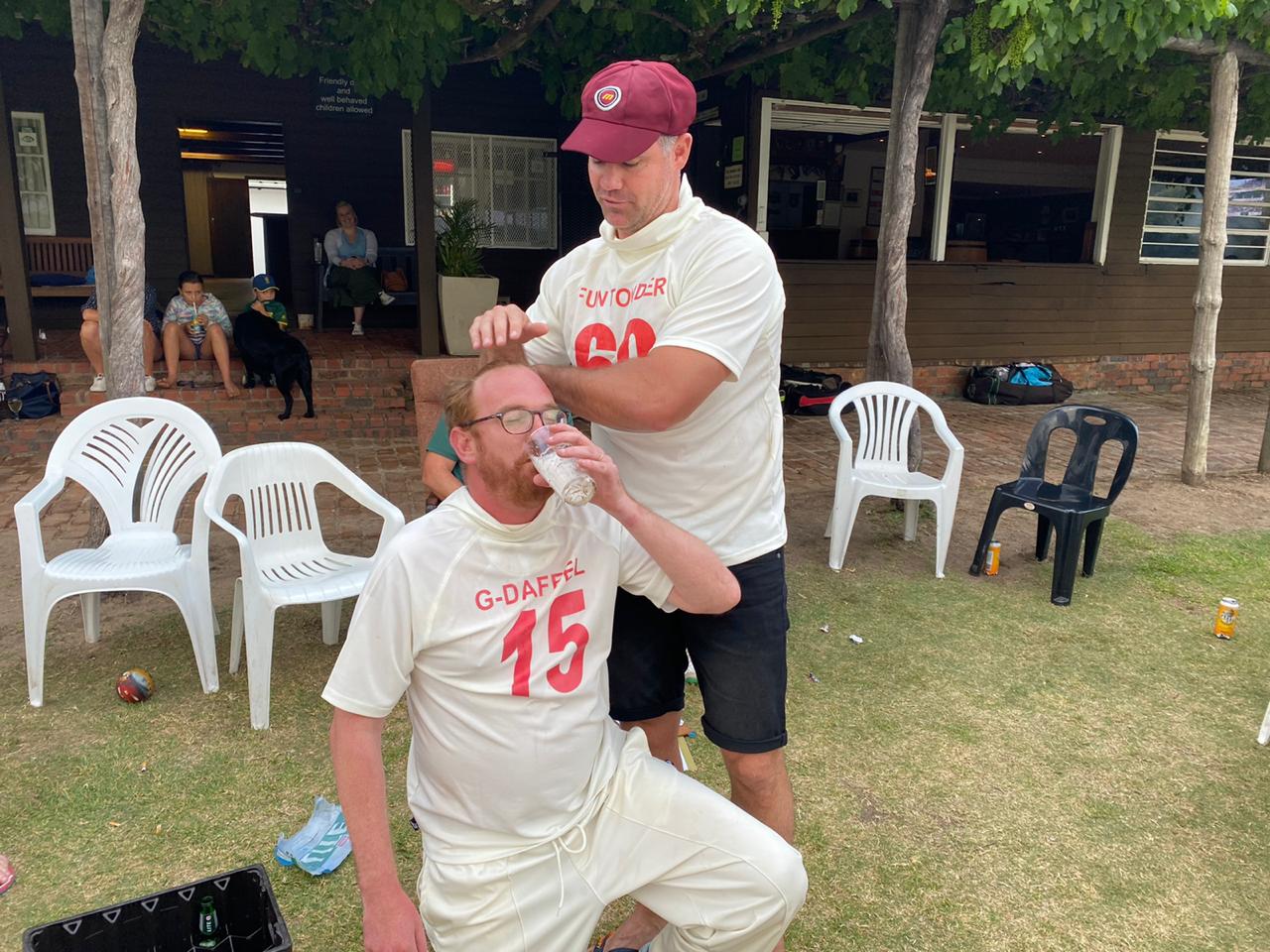 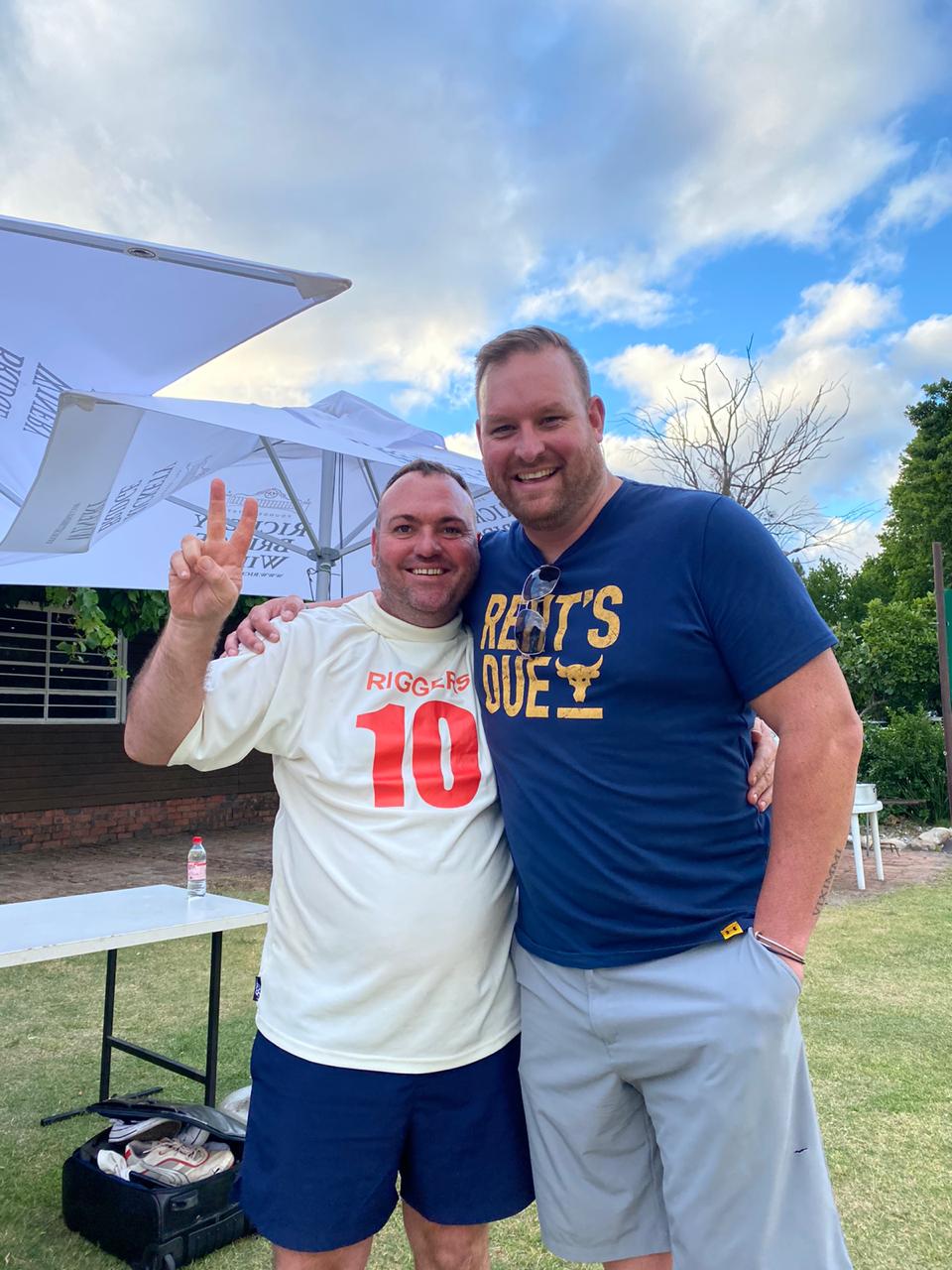 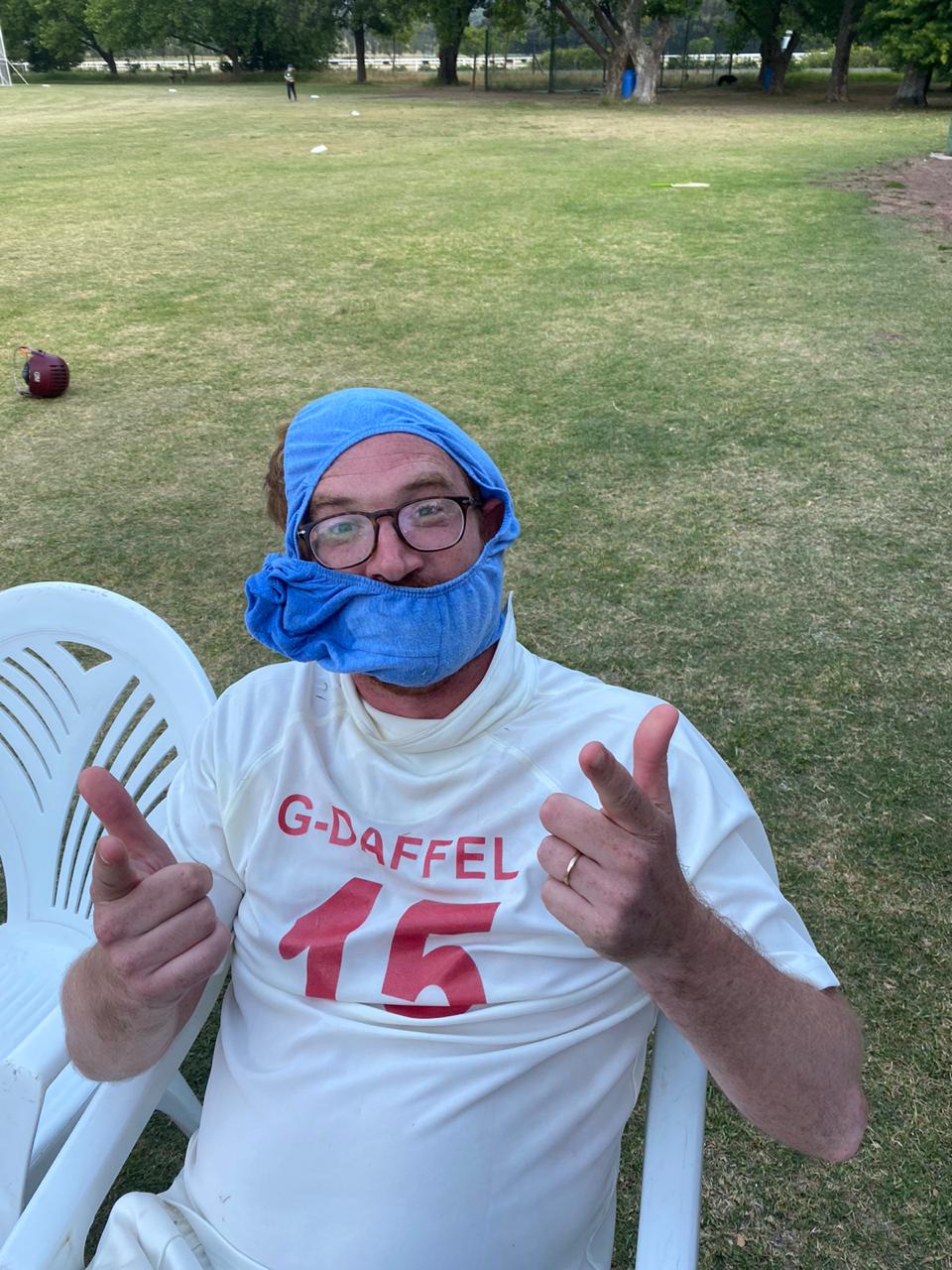 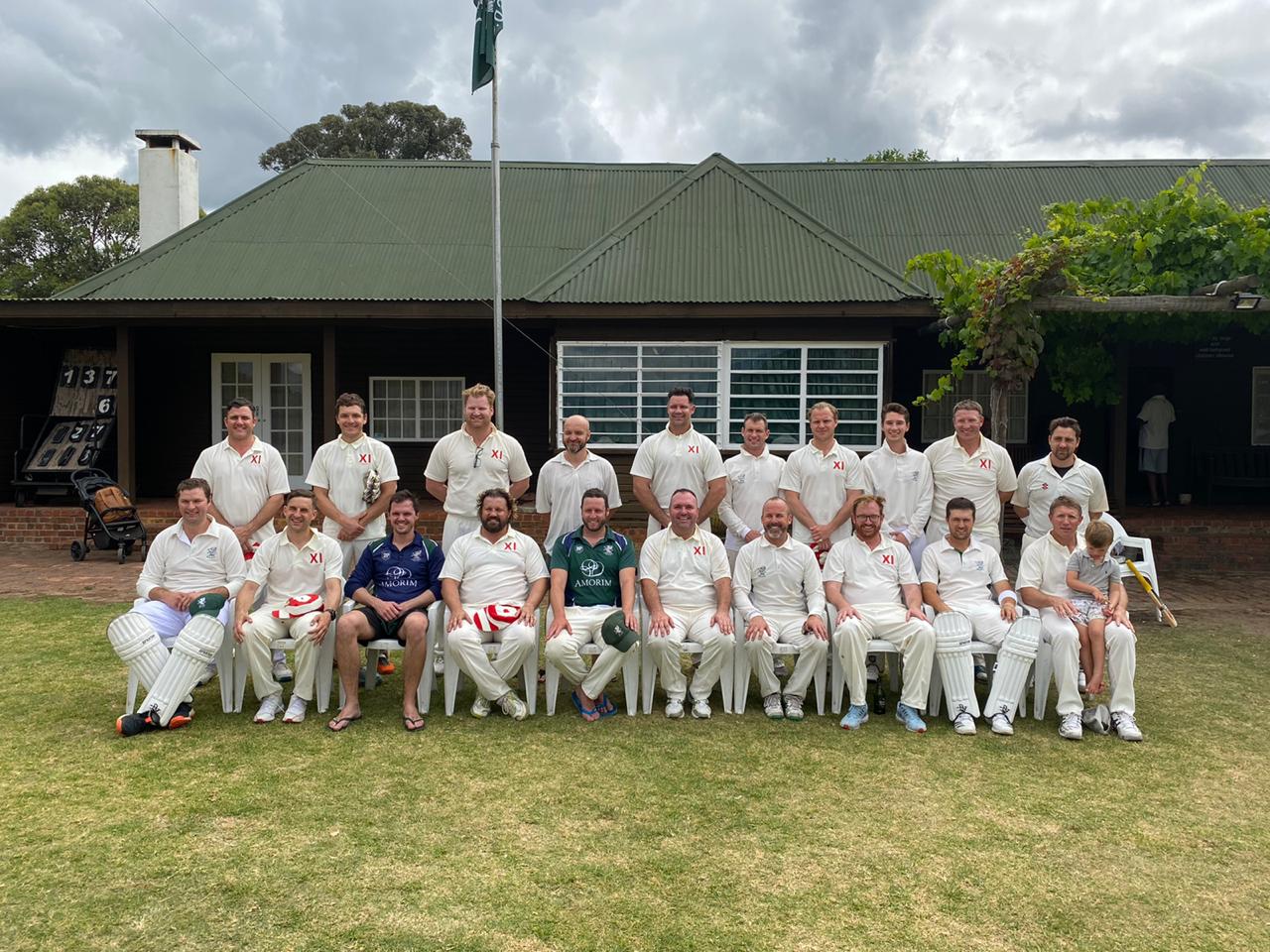 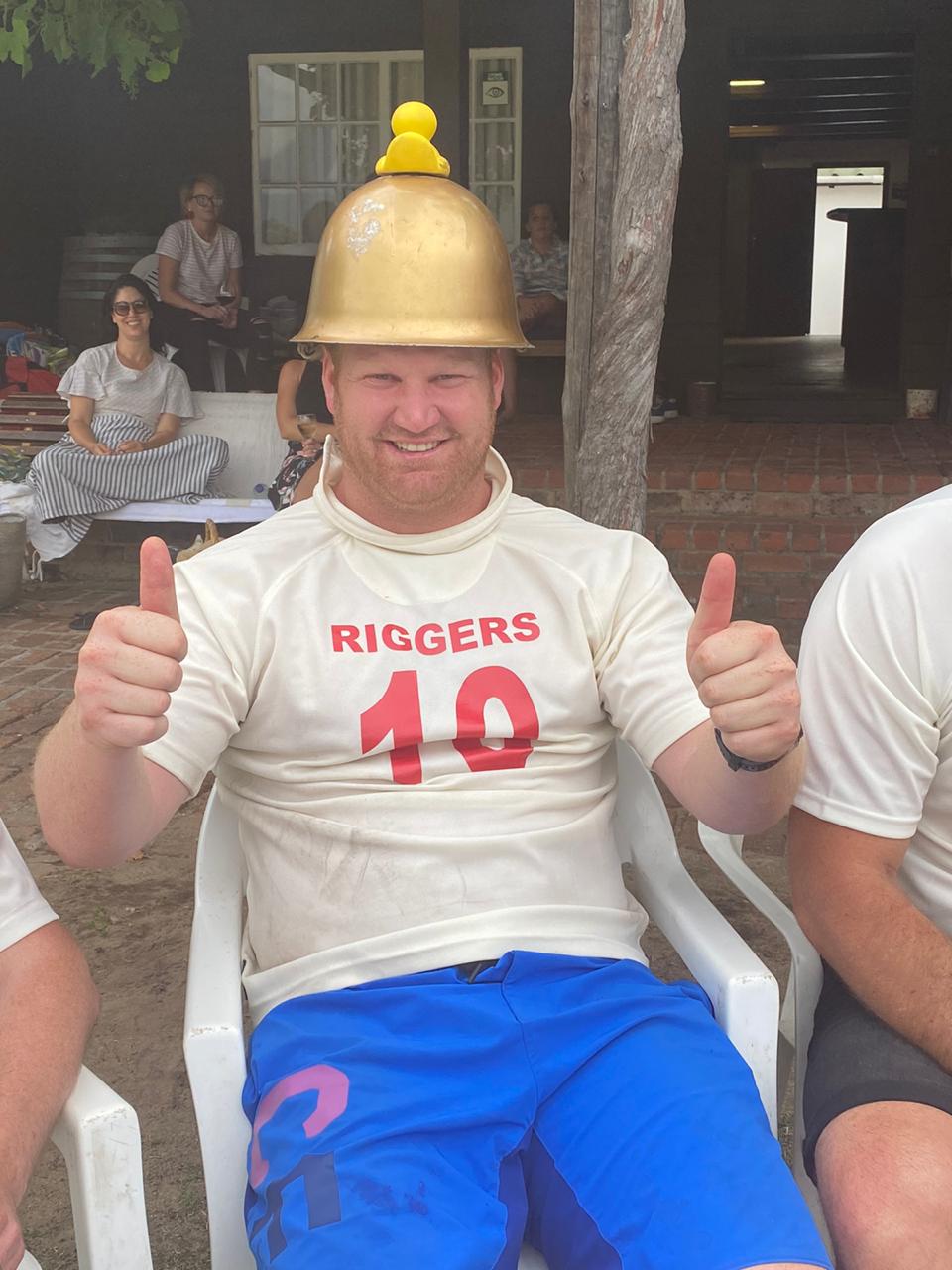