On the Boland’s hottest day of 2020 so far, Groot Drak hosted the guys from Rondebosch Pumas in what promised to be an epic encounter.

The Pumas were asked to bat first, while the Drakies triple-dosed themselves in sunscreen and took the field. Mixing things up a bit, Morne Maritz and Claude Chantler opened the bowling for the home side with a double-pronged seam attack. Claude struck early, claiming two wickets for 37 from 4, while Morne (0/26 from 5) kept things tidy at the other end and was unlucky not to pick up a wicket.

Even though there is always an element of risk when bringing on a spinner first change, Bruce Taylor started off with a maiden and then claimed the vital wicket of Garth in his second over. From there he took some punishment, finishing up with figures of 1/47 from 6 overs.

Groot Drak were in trouble at tea, having only taken 3 wickets, with the visitors starting to fire on all cylinders, finding the boundary with alarming regularity.

Danie van der Nest (0/47 from 7) joined the attack and started well, having a few chances dropped off his bowling. Not what you want as a fast bowler when you bowl seven on the trot under the scorching African Sun.

Jannes Mouton was without a doubt the pick of the bowlers, taking three wickets for just 21 runs in his seven overs, bringing Groot Drak firmly back in to the game as the Pumas surpassed the 200 run mark.

With plenty of work still to be done, Corrie Brand (2/35 from 5) was thrown the ball, coming on as a very unusual sixth bowling choice. He toiled hard and took two important wickets, but went for seven per over as the visitors piled on the runs.

Feeling that the Pumas needed even more runs, Craig McNaught brought himself on to bowl for the last over, which went for 13.

The side from Rondebosch would have been very happy with their effort as they went in to the break after a brilliantly paced innings of 230 for the loss of 8 wickets. A big total, requiring just more than 6.5 an over from the start!

After a quick cool-down in the pool, MC Uys and Charl Ackermann were asked to open the batting and started the run chase.

Being tasked with seeing the shine off the ball, both openers did extremely well, with Charl, while only scoring 7, saw off a vital 25 deliveries. MC at the other end took no prisoners and blasted an impressive 46 off 32, receiving a spectacular in-swinging Yorker to be dismissed just 4 short of what would have been a well-deserved 50.

A mini-collapse precipitated by Sean Petzer’s golden duck and Claude Chantler’s 3 from 5, had Groot Drak in all sorts of trouble at 50 for 4 just before drinks. Certainly not the start that the home side was hoping for.

It was time for the middle-order to show some mettle. Craig McNaught (28 from 29) and Jono Boulton fought hard and put on a solid 5th wicket partnership to steady the ship somewhat before the skipper was bowled through the gate.

Morne Maritz came in at 7 and wasted absolutely no time, making his intentions clear by smashing 47 from just 31 in a great display of hitting that included 4 sixes! [See the video below] Another unlucky batter to fall just short of 50, but an innings that played a massive role in getting Groot Drak a little closer to victory.

With Jono Boulton still at the crease, Corrie Brand picked up where Morne left off, dispatching each of the remaining bowlers to all corners. Corrie blasted 31* from 12, while Jono was left stranded as the third batter to narrowly miss out on 50 – scoring a stalwart-like and unbeaten 46 from 64 deliveries.

On paper, the victory looked fairly comfortable with 3 overs remaining, but the scorecard doesn’t necessarily tell the full story, as both teams sweated (literally) until the final runs were scored.

A wonderful game of cricket, with more than 460 runs scored on the day, was brought to a close with another splash in the pool and a brief fines meeting, before saying goodbye to our friends from Cape Town. We thoroughly look forward to a rematch at the Pumas’ new home ground in Rondebosch in the latter half of 2020! 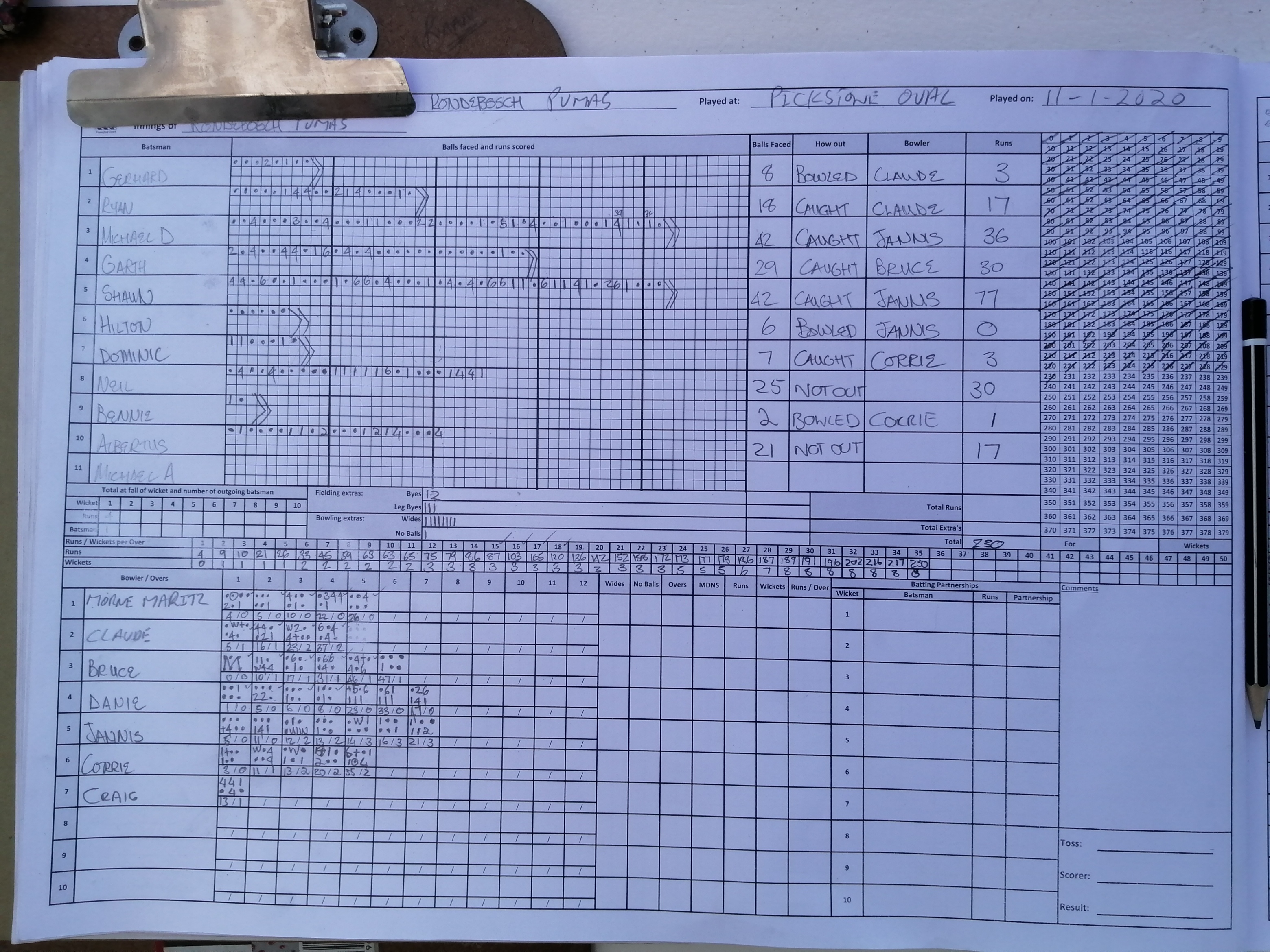 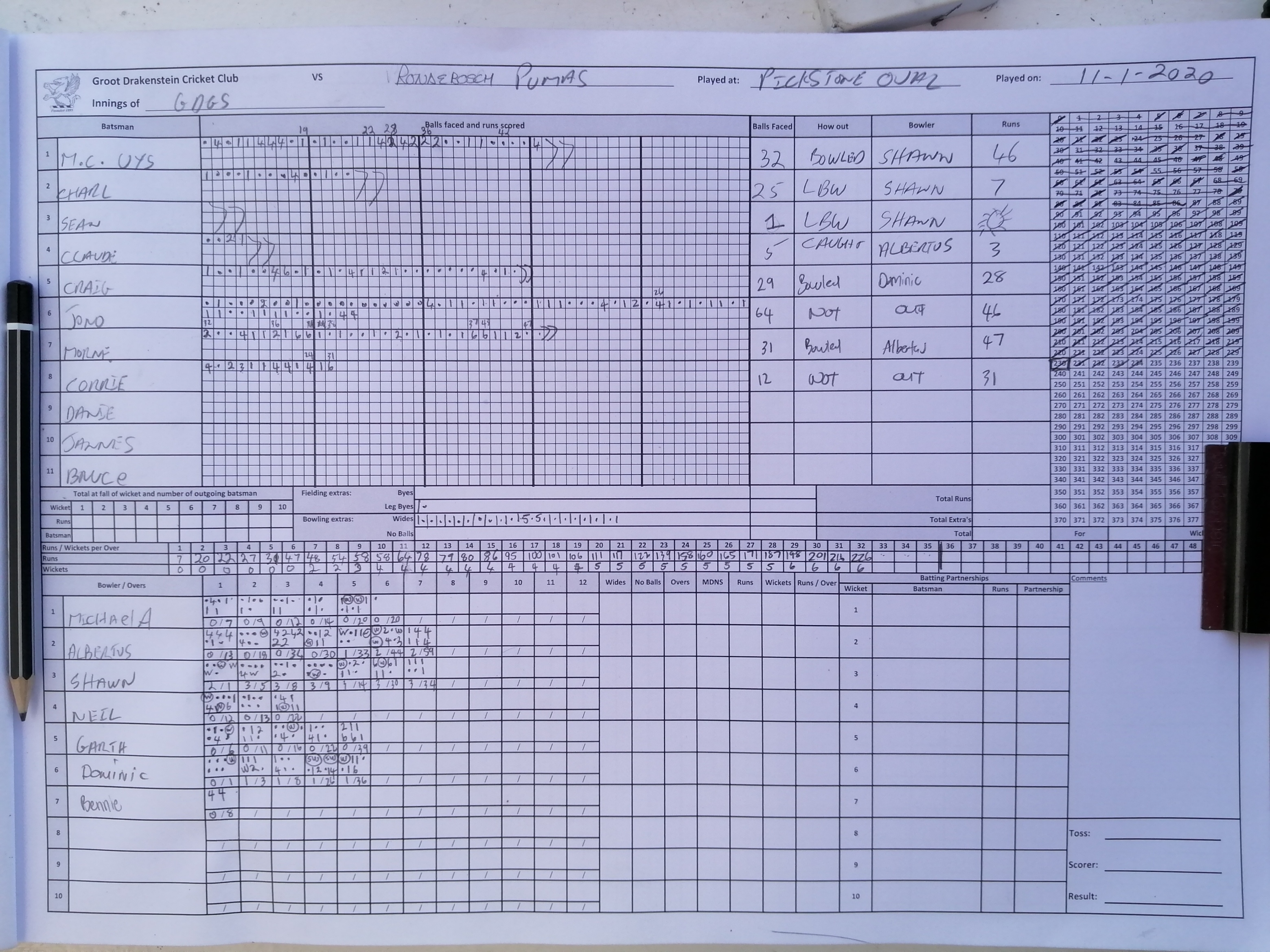