After having our last two games of the year rained off, it looked like the same fate might befall the first fixture of 2022. Luckily, the rain ceased and we were able to start play just an hour later than scheduled.

Groot Drak elected to bat on a slightly spongy surface, but knowing that there were 11 capable batters raring to go, it was the only option. MC Uys and Claude Chantler put on a handy opening stand, surpassing 100 runs without losing a wicket.

MC missed a straight one on 34 and made way for Quintin van der Westhuizen at number 3, who got in to his work immediately.
After batting himself in to some much needed form, Claude retired on 54 and brought Mike Devine to the wicket.

Mike (26) rotated the strike well and allowed Quintin to free his arms, who also notched up a half century in quick time with 8 boundaries to boot.

Rikus Walters at 5 had a rare lapse in concentration at the wicket and punched an easy catch to mid-wicket for 10. He was replaced by Alan Sherratt, who struck the ball cleanly from the start, smashing 27 runs in virtually no time.

Another batter looking for some form was Jono Boulton (36 not out), who got after the bowlers in tandem with Tim Whitfield (23 not out) in the last few overs of the innings. Both did exactly as required, carting several boundaries to all parts before running out of deliveries.

A monster total of 302 was posted after 35 overs, which was seriously helped by the fact that 41 extras were conceded in the process.

After a dip in the pool and a bite to eat, Gardens started the run chase with the track drying out nicely in the afternoon sun.

The visitors got off to a flyer, with Admire Manyumwa seeing it like a beach ball from the outset and punishing anything in his strike zone. Another 100 opening stand kept Gardens in the hunt, with Morne Maritz (1/55 from 7) and Hugo Brink (0/23 from 4) unable to get the new ball to talk.

Alan Sherrat (1/46 from 7) bowled first change and took some severe punishment in his first few overs of leg spin, while Craig McNaught (1/21 from 3) from the other end managed to break the opening partnership. Jono Boulton took a sharp stumping chance from Alan’s bowling, which had Gardens 2 down at drinks.

Meanwhile, Admire was loving the flat track and cruised to 100 and showed no signs of relenting.

With some wily pace bowling, Tim Whitfield (2/40 from 7) found some rhythm after a few overs and picked up 2 wickets, exposing the middle order.
Claude’s (0/27 from 6) first over went for 13, but he soon pulled it back and did a great job of restricting the runs.

In the end, the runs were just too many, but a valiant effort from Gardens saw them put on 230/5 after their allotted overs – a total that would have been a winning one more often than not. Admire carried his bat, scoring 161 not out in an incredible display of innovative batting.

After having given us 533 runs, it was only fitting that the pitch be honoured after the game with a quick salute and a refreshment. Fines were well-deserved and thoroughly enjoyed before parting ways with the Gardens lads after an epic day of cricket. 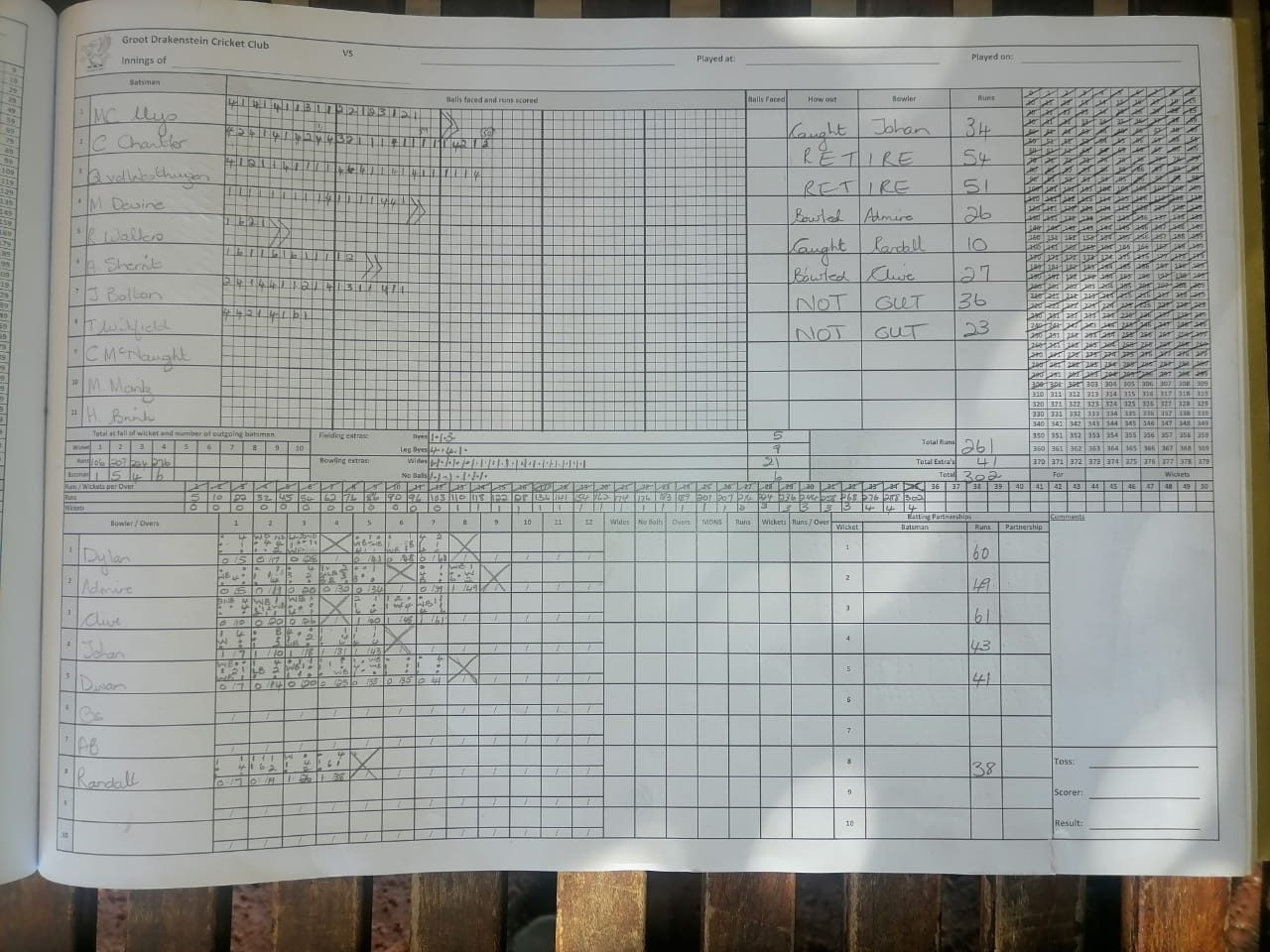 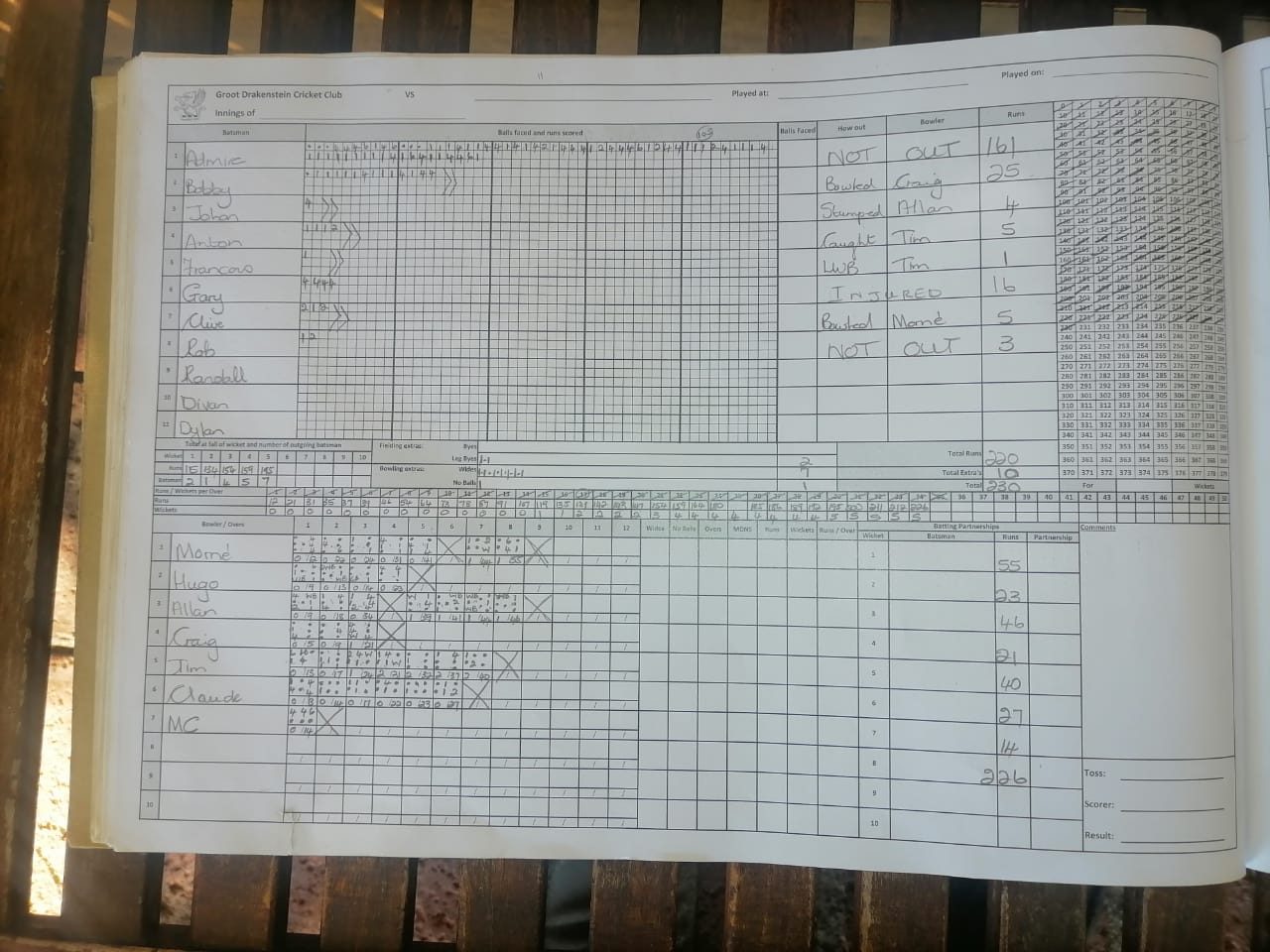