It was great to squeeze in a fixture against our good mates at Black Batts after our previous engagement was called off because of the weather. From one extreme to the other, the Boland experienced temperatures in the low 40s on Saturday, which meant our swimming pool saw more action than the Durban beachfront on New Year’s day.

Having a huge amount of faith in the Groot Drak batting lineup, the home side decided to bat first with the hope of putting on a big total on a batsman-friendly wicket. MC Uys was the only top-order batsman to put on any meaningful runs with 25 from 22, while Jaco Swarts (10 from 9), Cassie Carstens (11 from 12), Rikus Walters (8 from 15) and Craig McNaught (16 from 25) put enormous pressure on the lower order by gifting their wickets to the opposition.

Christo la Grange, fresh from a trail-run, came in at 6 to stabilize the innings with Jono Boulton joining him at 7. Both batters slowed the run rate and stood firm in an attempt to rescue Drak from an embarrassing collapse. The two put on a very healthy partnership and showed real grit throughout their collective stints.

Christo finally fell after putting on a stoic 26 from 43, while Jono Boulton was unceremoniously run out on 25 from 40, pulling a muscle in the process which would rule him out of the rest of the game.

Claude Chantler (7 from 11), Tim Whitfield (2 from 4) and Hugo Brink (3 from 8) had the unenviable task of needing to slog towards the death, but in the end Groot Drak were bowled out for a paltry 162 after 34 overs, with Bruce Taylor being stranded on 5 not out.

The runs felt at least 50 light of a defendable total, but after a quick swim and a refreshment, the Drakies were ready to take on the challenge with the ball.

Tim Whitfield (1/32 from 7) broke through in his first over, starting with a wicket maiden to give a little hope to the situation, while Hugo Brink (0/21 from 4) toiled hard and was unlucky not to nab a few wickets in his spell.

Bruce Taylor (1/48 from 7) and MC Uys (2/33 from 4) were brought on early and both managed wickets as stand-in keeper Claude Chantler took a sharp stumping off Bruce’s bowling and MC picked up two wickets from catches in the outfield.

While wonderful to watch at the crease, Bruce Sharpe and Steve Palframan are not who you want at the wicket when defending a small total. Sharpie breezed to 63*, while Palfers only needed 11* to get the Batts over the line after just 25 overs.

Despite the one-sided game, the match was enjoyed almost as much as the cold beer in the shade afterwards. Congrats to Black Batts on their victory and good luck for the rest of the season! 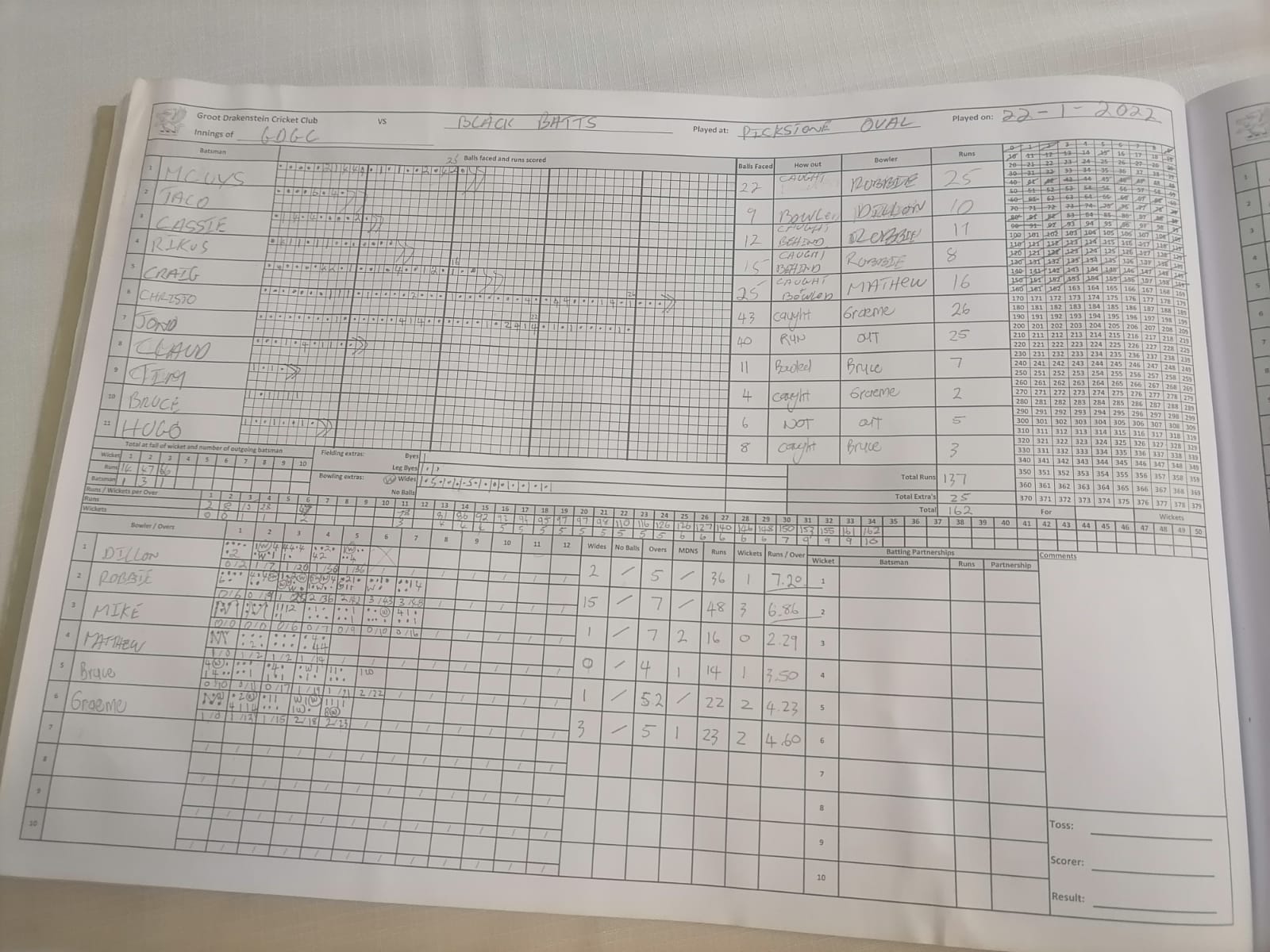 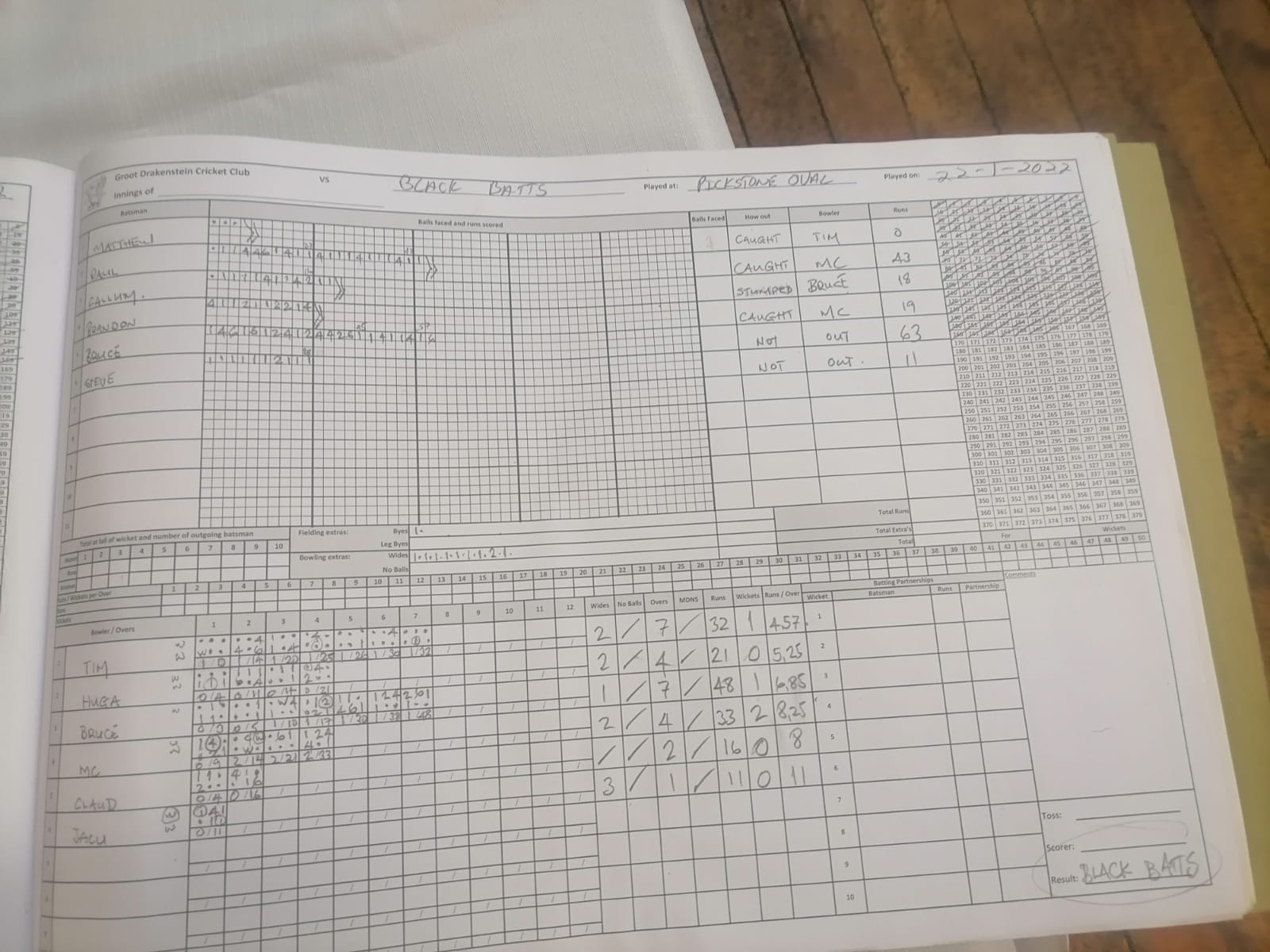