We hadn’t seen our friends from Somerset West in a few years, so after a quick pitch assessment, Bobby and the Oakes were offered the chance to bat, with some gloomy overhead conditions in the morning.

Hugo Brink and Stephan Krige took the new ball and bowled two very different opening spells. Stephan (0/27 from 7) had the ball on a string, landing it in a good area and beating the bat delivery after delivery – this meant that he would bowl his entire quota of overs on the trot. From the other end, Hugo struggled to control the prodigious movement in the air, which saw him leak multiple wides before being given a rest.

Craig McNaught (1/11 from 4) managed to take the first wicket and kept the batters reasonably quiet, before making way for Tim Whitfield, joined by Bruce Taylor.

Tim (2/9 from 2) and Bruce (3/7 from 3) bowled ridiculously well, with Bruce nabbing 3 wickets in his first over, which should have been 4 had it not been for a simple dropped chance at short fine leg. Tim was also dropped by the same fielder, this time at first slip. With the Oakes struggling at 69 for 6, Johann ‘No Hands, No Man’ Agenbag (2/20 from 4) joined the attack and picked up two well-deserved wickets with his left arm seamers.

Hugo returned for a second spell and got wickets in each of his 2 overs, ending up with figures of 2 for 32 from 5, while Herman Fourie (0/28 from 4) bowled leggies from the other and created a few half-chances before the visitors were bowled out for 137 in 29 overs.

After a quick lunch break, the Groot Drak boys were feeling confident, with the middle-and-lower order batsmen tucking in to the bar offerings early on, knowing that Quintin van der Westhuizen and Rikus Walters were opening the batting.

Quintin and Rikus dealt almost exclusively in boundaries and had the fielders collecting balls from parts of the ground that hadn’t been explored since the late 70s. Spectators would have been excused for thinking that Drak were chasing 400, with the scoring rate red-lining at around 14 runs an over.

Joubert obviously also liked the look of the bowling and got off the mark with a boundary and continued to be ruthless with anything near to the slot. Joubert departed for a quick-fire 33 from 19 balls and brought Bruce Taylor to the crease at number 4.

Unfortunately Bruce didn’t get to face a delivery as Rikus got himself to 48* from 29 balls, securing a mammoth 8 wicket victory for Groot Drak in just the 11th over.

Fines were justifiably severe, with both sides having plenty of performances to reward and reprimand. At the end of the day it wasn’t the closest game, but always a pleasure to host the lads from Somerset Oakes and we wish them well for the remainder of the season. 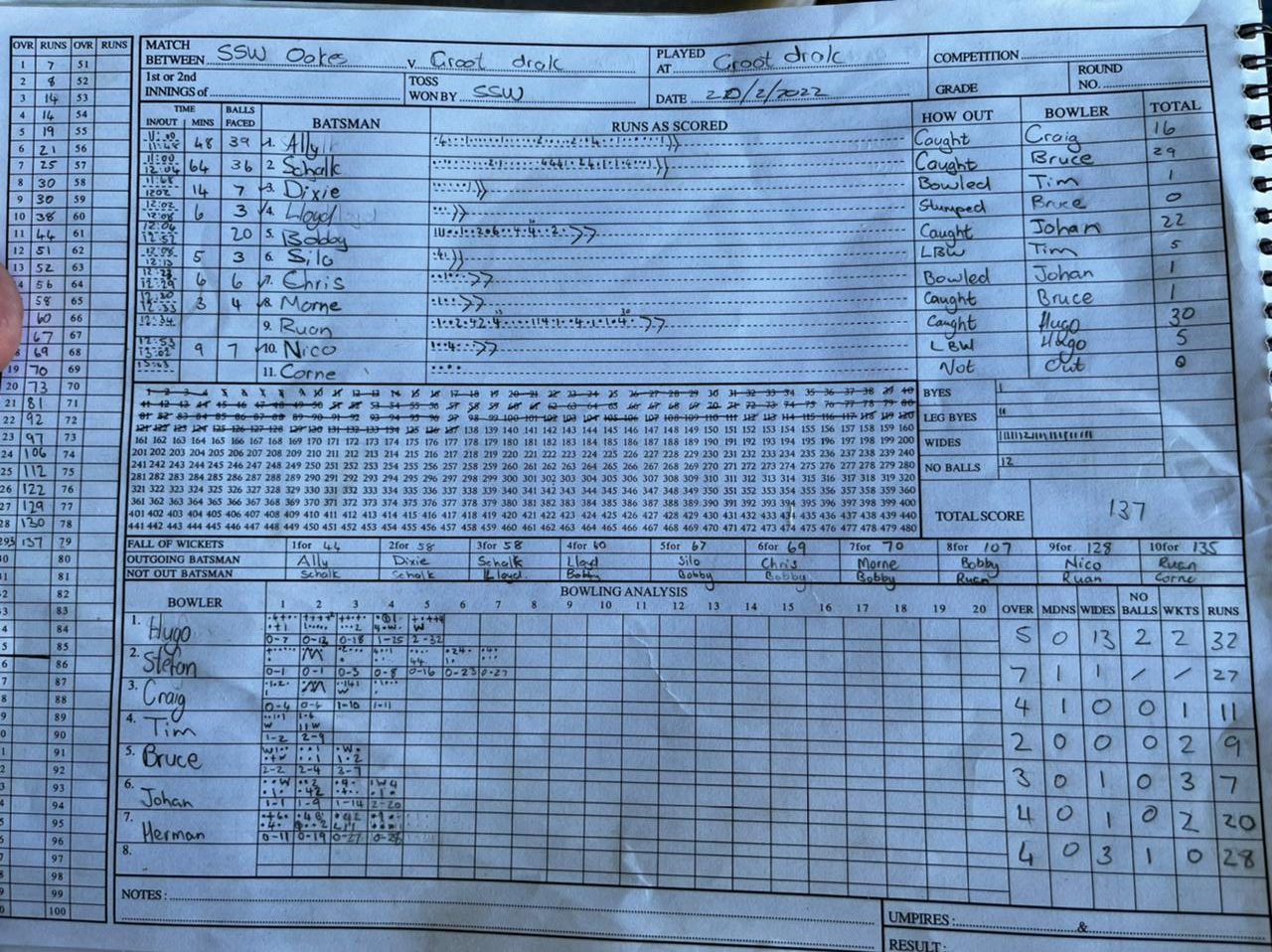 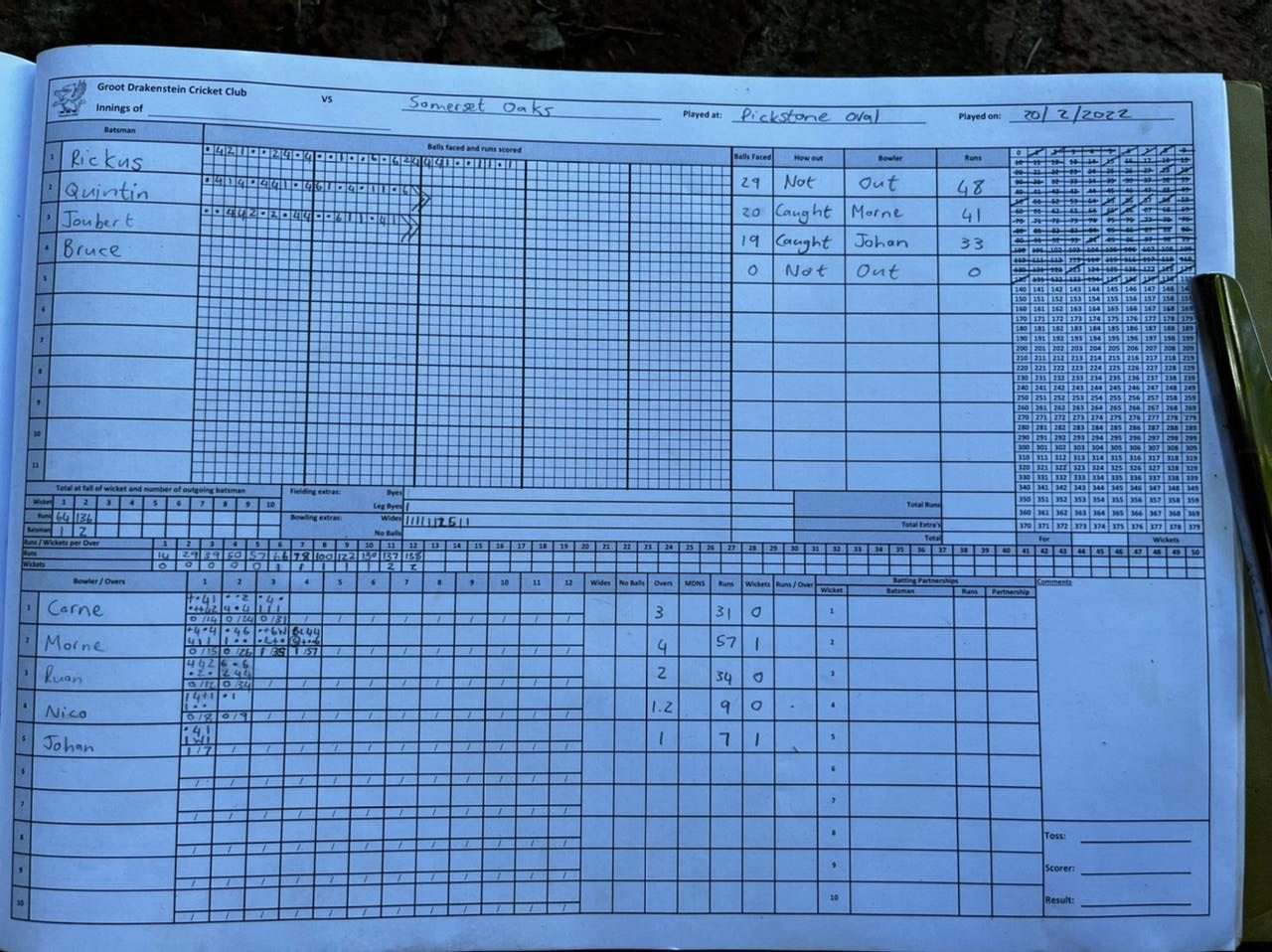