Things didn’t look good on Sunday morning, with dark storm clouds moving in from the North. Both teams drove to the ground in the rain, hoping that the sun would make an appearance at some point.

While the start was delayed by more than an hour, the covers eventually came off and Groot Drak elected to bat on a surprisingly dryish pitch against first-time opponents, Green Point Gullies.

Having pretty much cemented their opening spots, Quintin van der Westhuizen and Rikus Walters faced the new ball, but struggled with timing early on. Quintin nicked off for 14 from 19, finally giving Bruce Taylor a rare batting opportunity at number 3. Just three overs in and the rain came down again, forcing the covers back on to the field and 22 men in to the bar.

After losing another 45 minutes to the rain, the covers came off again and the game was reduced to 30 overs a side.

Bruce managed a run-a-ball 10 before being gunned LBW, brining Herman Fourie to the crease. Herman was also given out LBW for 4, exposing the middle order very early on as Claude Chantler made his way out to face the music.

Producing a solid knock of 36 from 48, Rikus was caught out after a mistimed pull shot to square leg.

Craig McNaught joined Claude at the crease to try and stabilise the innings, with Groot Drak on around 60/4 after 16 overs. Claude was seeing the ball big, and smashed 3 big sixes in his innings, bringing up a well-deserved fifty for his efforts. Craig also got stuck in, as the two put on a partnership close on 100 runs at roughly 8.5 an over – ensuring that there would be a defendable total on the board at half time.

Claude was eventually caught on the long-on boundary for a world-class 64 from 47 deliveries, bringing the ever-dangerous Tim Whitfield out to bat.

Tim got on with things immediately, bludgeoning 24 not out from just 9 balls as Craig (52* from 37) just got to his fifty just before the end of the innings.

With Groot Drak posting 218/5 from their 30 overs, the boys were fairly chuffed with their efforts, considering that we had talked about 170 likely being tough to chase, given the conditions.

A shortened lunch interval saw both teams back on the field, ready for the run chase in no time.

Morne Maritz (1/12 from 4) opened the bowling and landed a series of unplayable deliveries in his spell. Joubert Kotze opened with Morne and produced a stunning yorker with his first delivery after many months at sea, uprooting the woodwork and finding himself back on the deck.

Joubert had to be removed from the attack as he took down 4 Gullies batters for just 6 runs in a remarkable spell of quick bowling.

Having been overlooked as a bowler for the past season, Mike Devine was finally given the opportunity to land a few offies. Mike found the edge twice and was rewarded with figures of 2/11 from 4 overs.

Hugo Brink (2/21 from 4) also joined the attack and, once the radar started to work, he had two good catches taken from his bowling, seeing off the last of the Gullies batters in the 16th over – just after they had celebrated their team half century.

Despite the rather one-sided affair, everyone was just pleased that the weather had allowed a game of cricket to take place. Fines were dished out in their usual fashion as a healthy dose of left-handed beverages were consumed, while we all thoroughly enjoyed the company of our new friends from Green Point.

Good luck to the Gullies for the rest of their season and congrats to Joubert Kotze on his man of the match performance with the ball. 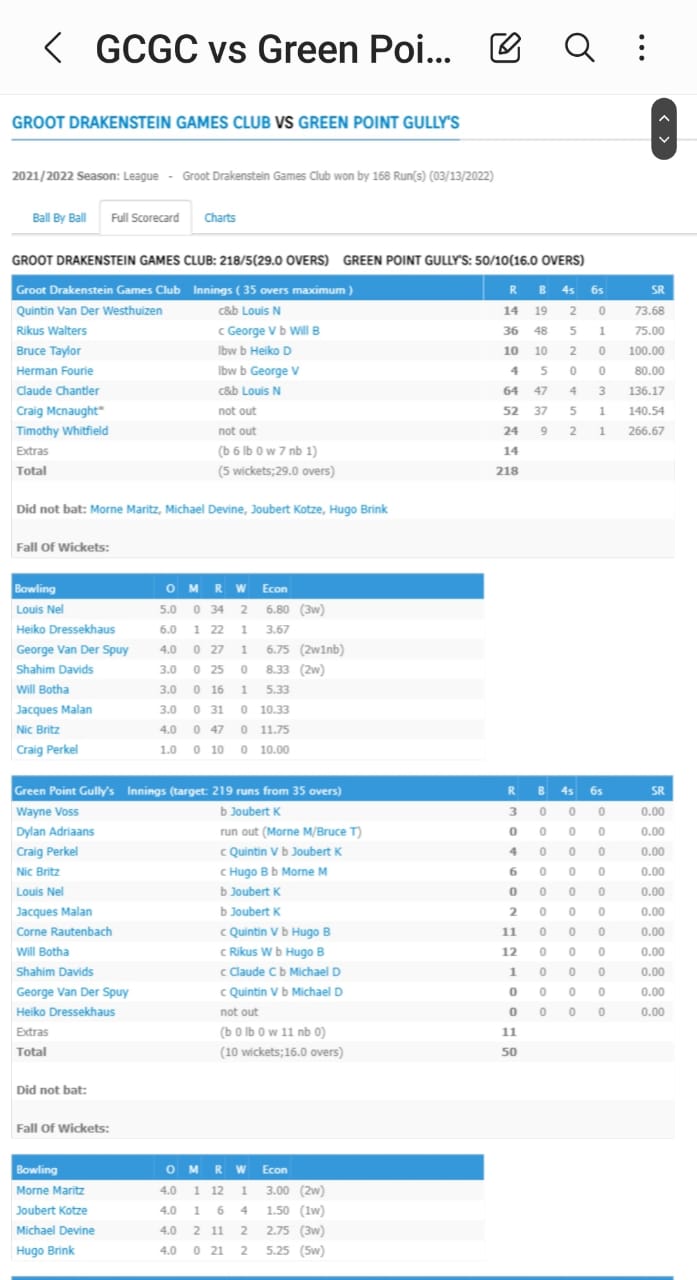