The lads from Cape Town Cricket Club paid a visit to Groot Drak after our scheduled fixture earlier in the season was rained off. The weather on Sunday the 6th of February was glorious and Groot Drak had no hesitation in opting to bat first on yet another belter of a pitch prepared by groundsman, Vitalis Burombo.

The opening pair of Jaco Swarts and Quintin van der Westhuizen got the home team off to a flyer of a start. Both looked in good touch, but the partnership came to an end with Quintin’s compression socks failing him as he set off for a rather relaxed single and pulled a calf muscle. Not long after Quintin retired on 41 from 46, Jaco nicked off for a well-played 43 from 32.

Rikus Walters and Claude Chantler subdued the run-rate somewhat, having to contend with some accurate bowling from the CTCC boys. Rikus (34 from 42) and Claude (23 from 32) got starts, but neither was able to kick on. Paul du Plessis (on loan from Scorpions) was virtually unplayable as he leaked only 18 runs from his 7 overs in a seriously impressive stint of spin bowling.

After a sensational season so far, Tim Whitfield had to fail at some point and was run out on 8 by some sharp fielding and dodgy calling from the other end. Morne Landman went on the rampage and consistently found the middle of the bat, carting 5 sixes over cow-corner, while Craig McNaught (13 not out) at the other end merely needed to rotate the strike to keep the Land-man in the hot seat. Morne notched up a long overdue 52 from just 33 balls to get Drak out of some pretty serious trouble before being stumped in the final over.

Trying to reverse-sweep your first delivery is not generally what you read in the coaching manual, but Hugo Brink attempted it in any case, only to find first slip’s obliging hands, departing for a duck.

Morne Maritz faced just one ball for one run as the innings drew to a close, with Groot Drak posting a reasonable total of 221 for 6 after their 35 overs.

After some world-class lunch, supplied kindly by 12th man, Sean Petzer, the teams were revitalized and headed back out in to the summer sun for the run chase.

Morne Maritz along with debutant, Joubert Lategan, took ownership of the new ball and asked plenty questions of the batters. Joubert picked up a wicket in his first over by means of a cracking yorker that uprooted the stumps of Shane Martin.

Morne (2/37 from 7) then got in on the action as he trapped Dave Holgate in front before he could do too much damage, followed shortly by another wicket.

CTCC’s Rodney Mupfudza had just gotten himself to a deserved 50 before cutting the ball to first slip, where Craig McNaught took a good catch off the bowling of Bruce Taylor (2/37 from 6)

Opting to take the pace off the ball, Jaco Swarts was introduced in to the attack. Jakes kept things tidy but couldn’t find a breakthrough and finished with figures of 0/29 from 5.

Coming on later than expected, Hugo Brink still swung the ball late in the day and caused all sorts of issues for the batsmen. Hugo (1/32 from 6) deservedly picked up a crucial wicket, seeing Storm depart just 5 short of his 50.

From the other end, Tim Whitfield (0/35 from 5) started well, but lost his rhythm as he took some punishment from the lower order batsmen.

At this point, Cape Town were taking the game deep, needing around 30 runs from the last 3 overs with 4 wickets still in hand.

It took a sensational piece of fielding from Rikus Walters to get rid of CTCC skipper, Roger Moult, without facing a delivery as Rikus managed a direct hit from square leg with just one stump to aim at.

A super tidy over from Claude Chantler (0/3 from 1) meant that the total was just too much for the visitors, with Groot Drak clinching an eleven run victory in an enthralling match.

With both teams happy to take the game close, a quick drink was shared on the historic pitch, before setting up for a well-deserved fines meeting and a boerie roll on the braai.

Thanks to CTCC for their fantastic company and for a world-class day of cricket and camaraderie.

Man of the Match: Morne Landman 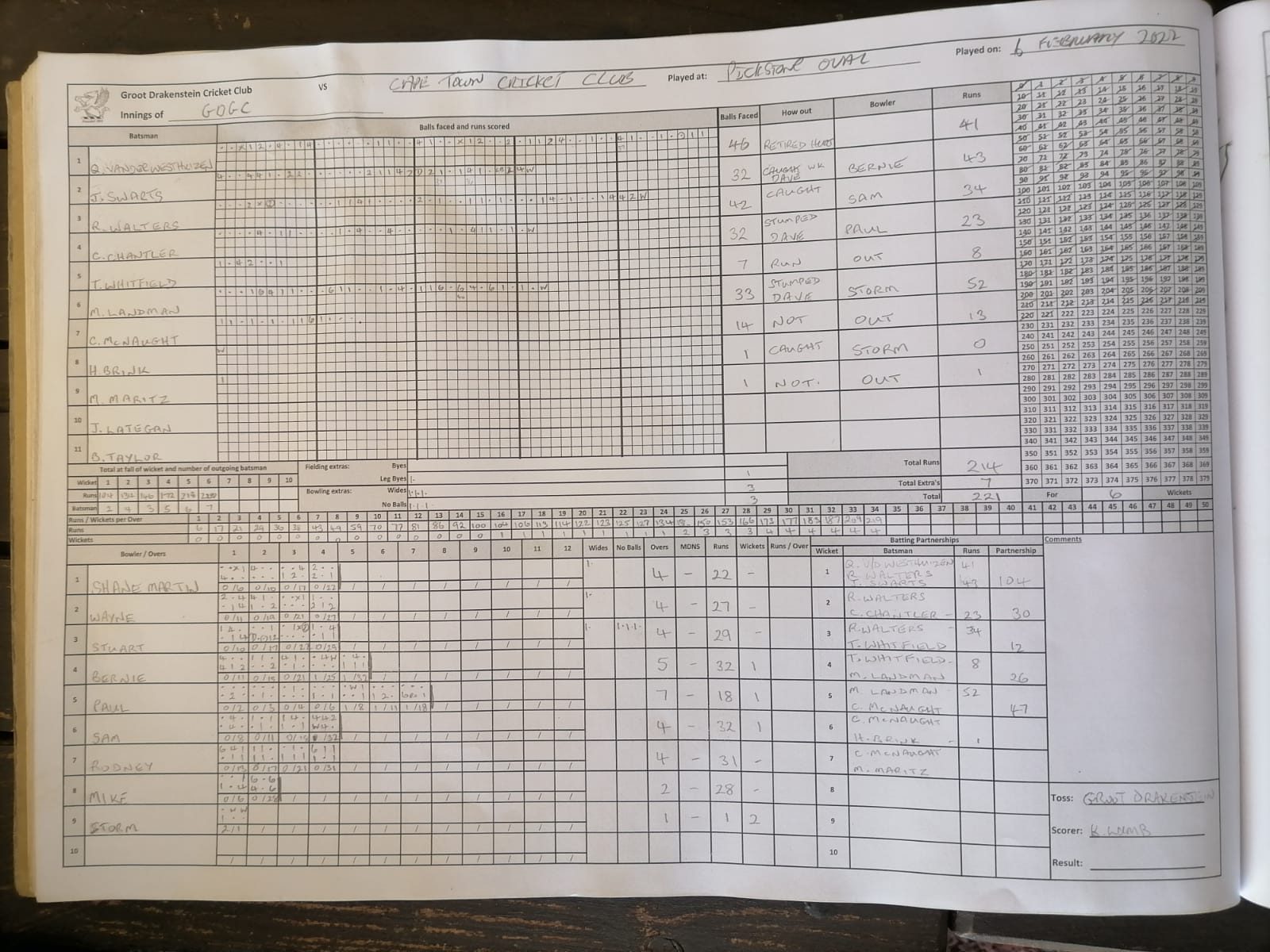 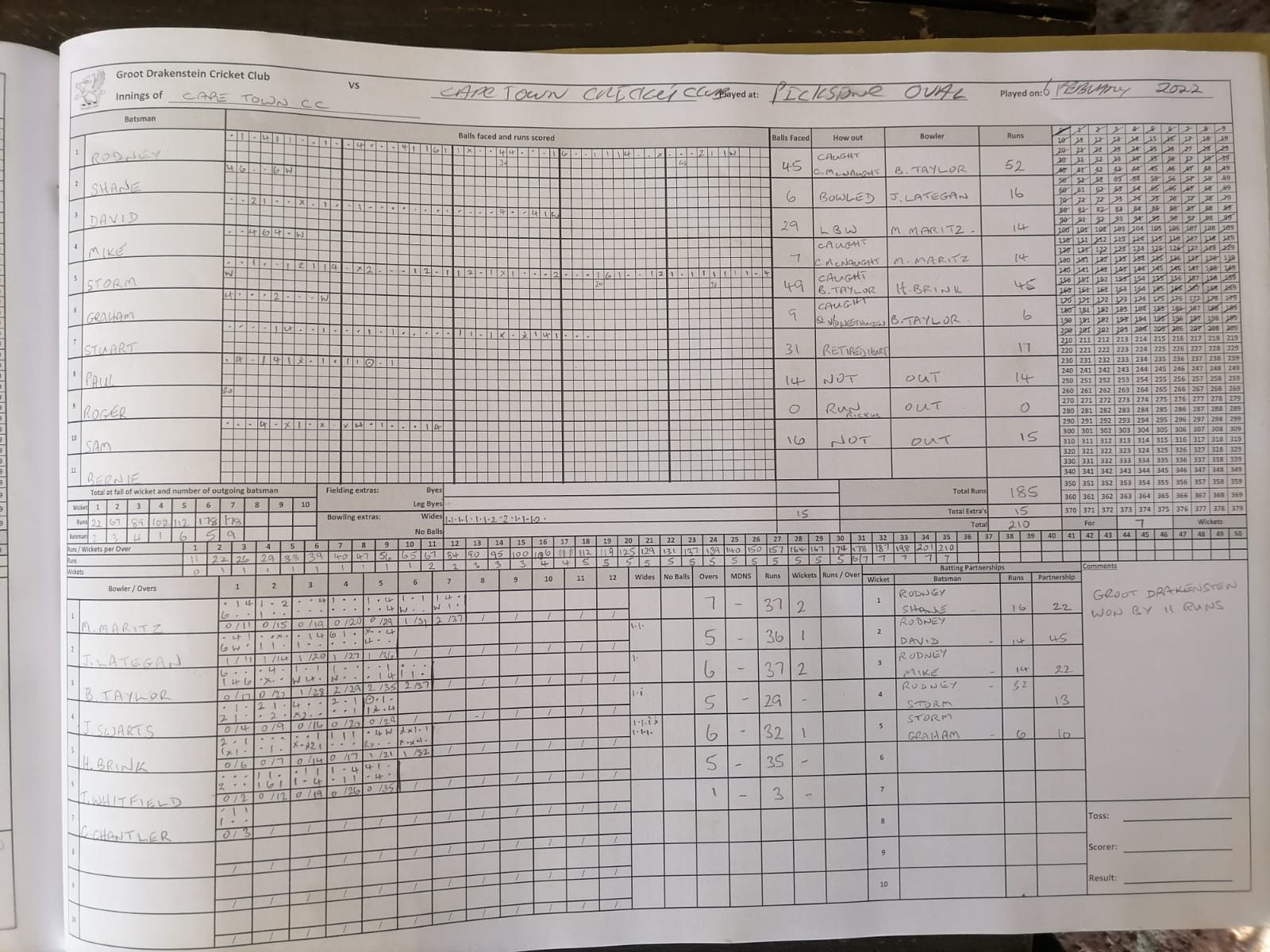